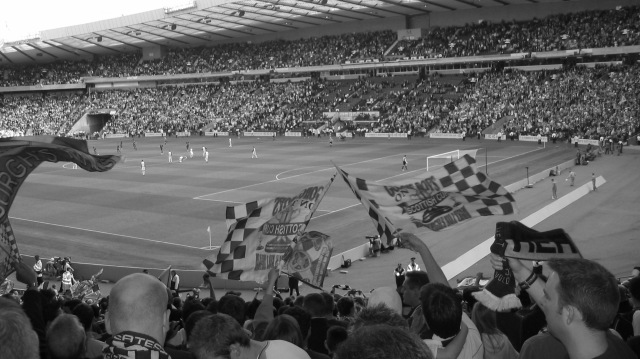 So what exactly is Bantr?

In a nutshell, Bantr is a place where football fans can check in to games, vote on the action, view live stats and even ‘banter’ with rival fans in real-time as a match unfolds.

When a user checks in, they’re asked to indicate how they’re watching the game – whether it’s on TV, live, online or on the radio:

The conversations can be filtered, meaning users can view what everyone at a match is saying, or simply view what fans of one particular team are saying:

The platform facilitates the opinion of neutral fans too, with score predictions displayed from fans of both teams and neutrals individually. When you check in to a match, you can instantly see how many other people are checked in for each team too.

The real-time aspect is key. Football fans can select their own team and vote for substitutions, and over time a picture can emerge over whether the fans agree with the manager’s decisions or not, an element which the company founder is particularly excited about.

The Next Web caught up with Peter McCormack, co-founder of Bantr, to see how the platform came to be and what exactly users can expect when it launches in time for the new English football season.

“Last season, I was wondering why Liverpool manager Roy Hodgson hadn’t lost his job yet”, says McCormack. “He probably should’ve lost his job about 8 weeks before he actually did. Wherever I looked online, on Twitter and other websites, everyone was saying how bad he was, and how he had to go. So we thought: with all these people complaining, wouldn’t it be good to know exactly what percentage support he had?”

However, the need to establish fans’ faith in their manager wasn’t enough to base a whole new social network on. But the seed was planted, and the idea for Bantr grew from there.

“We thought it would be great to have lots of aggregated fan content”, says McCormack. “And that’s how the concept of Bantr was born.”

The theme of how much faith fans have in their manager is still a key element of Bantr though. When fans first register on the site, they must answer ‘yes’ or ‘no’ to whether they support their team’s manager. They can change their answer at any point, but it means that it’s possible to see how much support a manager has at any given point.

“This is one of our unique features that we think is great, but it’s something the football leagues might not like”, says McCormack. “Whilst managers are criticized all the time in the newspapers, to have these kind of rolling stats is likely to get on certain people’s nerves.”

Whilst McCormack believes this particular feature is something that could attract the ire of the powers that be within English football, he has engaged with the relevant bodies throughout to ensure everything runs smoothly. There have been a lot of rules to follow and licensing issues to manage.

It transpires that it costs many thousands of pounds a year just to display football fixtures and gain access to live game feeds, which are obviously key requirements for Bantr.

There were issues in using the clubs’ badges, because the rights to many of the teams’ emblems are owned by a third party. “They grant permission to some people”, says McCormack. “But they said no to us because we’re operating in a similar space to them.”

‘For fans of all clubs’

Despite the obstacles, Bantr is now being fine-tuned in the build-up to launch, and McCormack is adamant that the platform is for fans of ALL teams, not just the big guns.

“A big thing for us is about giving a voice and control back to the fans”, says McCormack. “We have tried to make Bantr about all teams and all fans but most of all the relationship between you and your team. Yeovil Town v Shrewsbury is as important to us as Manchester United v Chelsea.”

Bantr is more than a social network though. It’s also been gamified, and similar to Foursquare, users’ actions can give them points which in turn can alter the experience. Points can only be gained from positive actions relating to a user’s own club, such as posting a comment that receives x amount of likes. The person with the most points for a particular team can become chairman, though they can be sacked if another user gains more points.

“We have so many features we want to develop”, says McCormack. “But our target was always to be ready for the launch of the season. We are going to allow the community to vote for features though to give a sense of ownership back to them.”

Users can register using Facebook Connect, which simplifies the signup process, whilst giving new users instant access to other football-loving friends. “We have built the backend using NoSQL and MongoDB”, says McCormack. “Now, I am by no means a techie but the development team assure me that this is best for scalability.”

Football is the most watched sport in the world, surely Bantr is nothing new, right? Well, yes and no. “When we first came up with the idea we spent about two months sitting on it as we were convinced someone else must be doing it”, says McCormack. “We have found similar sites, such as Sofanatics which aggregates tweets, but it’s not really what we’re doing. Plus, Sofanatics will only activate a team if it has 10,000 followers, which we don’t think is right. We believe that fans of smaller clubs are just as important.”

At the start, Bantr will contain the teams from the top four English leagues, but anyone anywhere in the world will be able to register and participate in the social network, as long as they choose a team.

The startup’s longer term goals extend way beyond the confines of England too. “There are 600m people who watch the Premiership alone”, says McCormack. “But our goal for Bantr is to become the leading network for football fans worldwide. We’d love to expand across Europe next, and there’s even potential for this to grow beyond football into other sports.”

Bantr will launch with a Web app this weekend (mobile apps are in the pipeline too), and the 1,500 pre-registered users will first be able to use the site during the FA Community Shield match between Manchester United and Manchester City on Sunday.

McCormack tells me that Bantr has just closed a round of funding with seven angel investors, netting over £200,000. With the football season about to get underway, this investment couldn’t be any more timely.

Read next: Visual bookmarks service Zootool launches Pro accounts - and the price is up to you