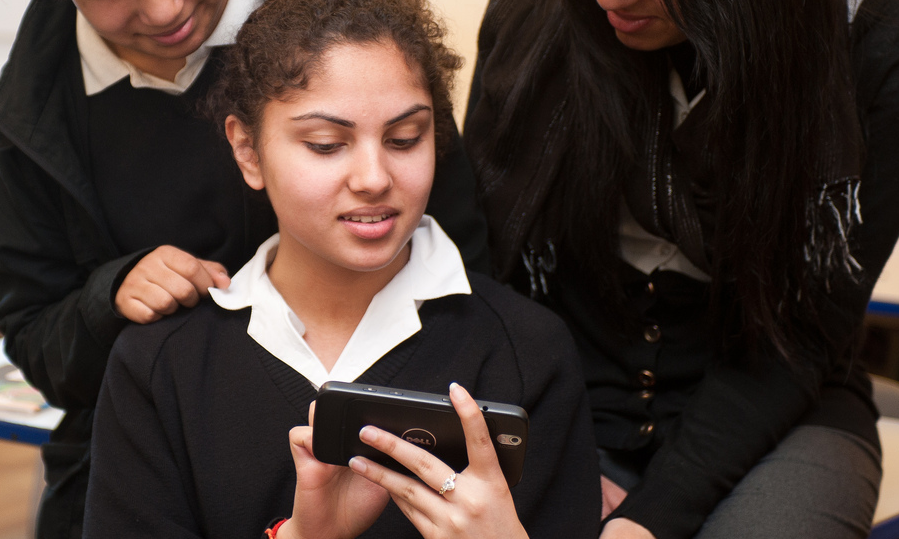 “Being German, working for a Brazilian company and trying to convince people to change the world in London isn’t the easiest task,” says Iris Lapinski, the CEO of London’s Apps for Good program, with a laugh.

But changing the world is exactly what she’s doing. The program she dreamed up teaches young people learn to create apps that transform their world, inspiring a new generation of eager tech minds.

Lapinski is a German born entrepreneur who found her way to CDI Europe after working as a commercial digital media and telecoms consultant for Ovum Farncombe Technology. CDI Europe is the European Hub for CDI (Centre for Digital Inclusion), a global network of community-based centres working on entrepreneurship and community action based in Brazil. CDI’s model has been proven across Latin America, but since tech adoption is drastically different in the UK, Lapinski was required to blaze a new path.

A grant from the Esmee Fairbairn Foundation in 2009 paid for a feasibility study for which Lapinski held 60 interviews across youth, digital entrepreneurship and technology over a 4-month period. When she began her research, the UK was hit with a wave of social media and new mobile technology, and the smartphone was fast becoming everyone’s most prized, must-have possession. Wanting to create something both technology focused and socially conscious, Lapinski decided that letting young people use technology, specifically mobile apps, as a tool to solve social problems would be CDI Europe’s raison d’être. She received another grant from the Esmee Fairbairn Foundation in 2011 to cover the core cost of the Apps For Good program.

If you ask a student, “‘Do you want to learn how to program in HTML, PHP or Android?’ They’ll run away,” says Lapinski. “But when we say, ‘Do you want to solve a problem you’re passionate about, one that’s relevant to you?’ You reach them. Apps are the new Rock ‘n’ Roll.” It’s similar to Dean Kamen’s FIRST program, which hooks kids on engineering with robotics instead for mobile apps. The resulting 50-70 hour course includes 5 steps: Identify the problem; market research; solutions through business models, technical ability and marketing models; product design; and build and test.

Satwant Singh was 25 years old when he applied for London’s Apps for Good program a year and a half ago. He was one of the first 9 students to take the course, which ran from April- June 2010 at High Trees Development Trust in South London. The program resulted in the creation of  Stop & Search, an Android app that allows young people to rate their experience of being stopped and searched by the police, to obtain information about their rights and to map the search and start seeing patterns. This is particularly pertinent due to the recent London riots, and they’re currently in talks with RIM to re-launch the app on the BlackBerry platform.

“It is no secret that mobile phone technology is being used by young adults, teens and children in large numbers. Apps For Good harnesses the excitement that mobile is creating amongst young people and provides young people with the tools and training to design and build meaningful products that can benefit themselves, their friends, their schools and their communities.

I fully expect to see some amazingly creative applications being developed which will undoubtedly attract the interest of the East London/Tech City UK community and beyond.  There is a tremendous need for such creativity and programming skills, and Apps For Good helps students develop the kinds of skills which are in demand worldwide.” -Robert Schukai, Global Head of Mobile Technology at Thomson Reuters and the New York Ambassador to London Tech City

This past school year, Singh taught the Apps For Good curriculum to a classroom of Muslim girls aged between 13 and 17 at the Central Foundation Girls School in Tower Hamlets, East London. “It was a little bit scary teaching tech to them,” he says smiling, “But they shocked me by how enthusiastic they were when it came to technology. In my generation, there aren’t a lot of girls into technology so seeing them really enthusiastic about tech was so great and it made my job easier. I didn’t need to try and excite them. They did that themselves.”

Singh depicts the growing experience of one student in particularly who was having a lot of trouble just getting to school when the course first started. He describes her as a shy, aggressive and stubborn student who would often find herself in detention. But as the course went on, not wanting to be the weakest link, she developed into a team leader. “She really grew throughout the course. I witnessed a shy girl who was on the ‘naughty list’ at school develop into a young woman who spoke in front of hundreds of people at a conference. She’s even our ambassador for the next course, encouraging other students to sign up.”

The young girls presented their ideas for mobile apps to a panel of judges in a “Dragon’s Den” style event that included reps from companies like Magic Lantern, Mozilla (Firefox) and the Head of Open Innovation at Orange Labs UK. The 3 resulting apps are ‘Transit’, a Bengali/English translation tool for parent-teacher liaison, ‘Buzzer Buddies’ a unique buddy-based alarm clock and a third app called ‘2-the-res-Q‘, which helps students deal with bullying, and won the competition. This summer, 2-the-res-Q worked with designers and developers from Fuerte, a London based app development team to build their real-time peer-to-peer mentoring system that works via text or a phone call, like a modern day hotline. The app also includes generic tips on how to respond, a tip of the day and a section for a personal diary. Apps For Good is launching in 40 schools this September in London and across the UK, including the Midlands, as far north as Carlisle and down to the south coast. The Apps For Good school locations are marked on the map in this article. There are another 100 schools on the waiting list, with requests from over 10 countries including the Phillipines, Thailand, Denmark, Germany, France, the U.S. and Nigeria. Debbie Forster, Apps for Good’s Head of Partnering says, “Schools from around the world have been knocking down our door. It’s not a hard sell, teachers are stalking me on Twitter!””

For subsidized schools in the UK, (schools that receive free meals or have special needs), Apps For Good provides free mobile devices and free contracts. All non-subsidized schools just pay for the cost of training. Later on this year, Apps for Good plans to open source its content, which is divided into two tiers: Proof learning content, which is information accrued over the past 18 months on how to go through the 5-step course, and content generated by the Expert Community, which consists of tech and dev professionals giving their time and resources to develop app ideas. Schools don’t pay for the content, it’s open sourced-based under a non-commercial creative content license.

Apps For Good is now a core team of 8 people with an expert community of 150-200 designers, business people and developers from companies like Orange Labs, Fuerte, Google, (The London Android Group) Londroid and eBay. Apps for Good is supported by Dell YouthConnect and students work with  people and businesses in the tech and creative world including Orange Labs, TalkTalk and Techlightenment. Nominet Trust is funding the online platform while companies like Thomson Reuters are “adopting” schools, covering the costs for the program and sending employee volunteers.

There are similar programs in the States, such as Iridescent Learning a nonprofit that helps engineers and scientists connect with high school girls and underprivileged minority children in California and Oakland’s Youth Radio, which promotes young people’s intellectual, creative, and professional growth through education and access to media, albeit none with the scale or traction that Apps For Good has had. Lapinski and her team trained 50 students last year and will be training 1,500 by this fall. They plan to be in 1,000 schools next fall, reaching nearly 50,000 students by this time next year. Lapinski says about 2/3 of each of graduating classes thus far has said they want to specifically work in tech when they finish school.

And what are Apps For Good’s future plans? “Were going for world domination,” says Lapsinski confidently. Stay tuned for some big news from Apps For Good in two weeks time and watch our interview with Lapinski here:

Read next: Google Docs adds copy and paste for drawings and shapes