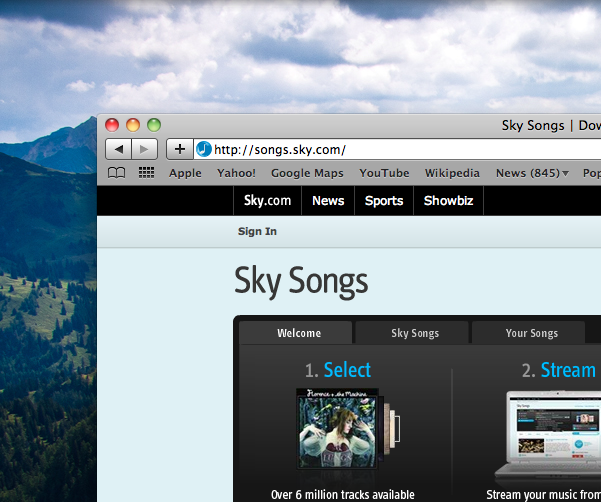 BSkyB’s Sky Songs music subscription service is to close, just over a year after the service launched as another high-profile competitor to Apple’s dominant iTunes platform and popular streaming service Spotify.

Sky Songs launched as an ad-free service, offering 5 million tracks initially for a flat fee of £6.49 per month, with a second subscription available at £7.99. As the service faltered, BSkyB reduced its pricing, offering the service for as low as £4.99.

The company has admitted that the music service was “unable to reach a large enough customer base”, even with the backing of all the major music labels, EMI, Universal, Sony and Warner, something that Spotify, one of its main competitors has up to now failed to do. Whereas Spotify offered unlimited streaming of tracks, coupled with advertising, to non-paying customers, Sky Songs restricted users to 30 seconds, offering a download service should users want to listen to the entire song.

Virgin Media was said to be in talks with Spotify to deliver a streaming service for the UK company whilst it prepared to launch its own service. It is almost a matter of time until Apple moves its iTunes music service to the cloud, allowing users to take their downloaded music wherever they go. With its own service not penetrating the market BSkyB has seen the potential competition and decided it should exit the market before it loses too much revenue.

Sky Songs customers will no longer have any payments taken from their accounts, according to an email from the company, with the service closing on February 7.

“We’ve taken the difficult decision to close Sky Songs. Although we are extremely proud of the service we built and the experience it offers, we just didn’t see the consumer demand we’d hoped for.

“As Sky Songs demonstrates, we’re a business that takes risks and innovates, but at the same time, we’re pragmatic and act decisively when a new venture isn’t working out.”