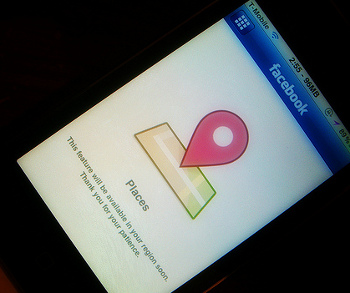 There was some fevered retweeting going on at the weekend when a number of people started claiming that Facebook Places was working in the UK, and we’ve seen first-hand evidence that makes us think that there was definitely something going on.

The service is only officially available in the USA right now. As TechCrunch Europe has reported, Facebook denies that any testing was taking place in the UK at the weekend. However, whether it was a secret test or a technical glitch that led to it, we’re pretty sure that people were checking in with Facebook Places in the UK last Saturday afternoon.

The hub of the check in activity appears to have been an SEO conference in Leeds, where one attendee managed to grab this screenshot of a number of checkins during Saturday afternoon. Of course, screenshots can be faked but yesterday I saw an actual iPhone that had made a check-in at the conference. Facebook’s iPhone app usually tells you that the service is unavailable when you tap the Places icon outside the USA. However, for this user it brought up a list of previous checkins as seen in the screenshot here. When the user tried to switch back to make a new check in, the app simply hung, failing to bring back any results.

Facebook isn’t saying when Places will officially launch outside the USA. For now we’ll just have to play the waiting game and (if you’re really desperate) pray to catch a glitch/test like the one that seemed to happen on Saturday to give a brief go in the meantime.