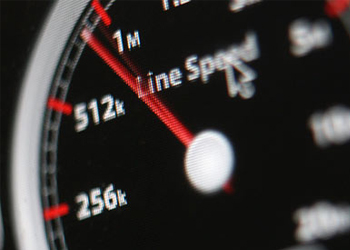 A report released by ICM  shows 9 out of 10 people find broadband terminology in advertising misleading when compared against the actual speeds they recieve.

Consumers are becoming increasingly frustrated with broadband companies describing speeds as ‘up to’ which are very rarely delivered due to the UK’s broadband infrastructure.

The main issue arises with connections over copper lines, where speed can be heavily affected by the distance to the exchange, whereas with fibre optic cabling, provided by Virgin Media for example, can provide a much more consistent speed.

A report by Ofcom in July of this year, stated some interesting research regarding the actual speeds customers can expect (please see below) when purchasing broadband with a certain ‘up to’ speeds being advertised.

As mentioned, because Virgin Media offer fibre optic cabling, its performance is usually closer than the competition to the actual average speed while providers including AOL, TalkTalk, Sky that piggy back BT’s infrastructure fall worryingly short.

For example an advertised package from Orange for 8mbps actually only produces an average speed of between 3.3 to 4.2 which is around half the promoted amount.

From an advertising point of view, promoting more realistic speeds to customers in certain areas could prove a logistical nightmare, but the current terminology and the above actual average speeds are clearly frustrating consumers.

In addition, broadband companies are clearly not providing the tools to make the actual speeds customers could expect or are recieving more transparent, especially for the less tech savvy users.  The report from ICM stated that 90% were unsure of the actual speed they were receiving.

If prospective customers were either clearly told in the signing up process, or provided tools to determine the expected speed in advance, there would likley to be much less of an uproar.

Read next: Samsung Galaxy Tab Rooted, A Whole Month Before Its Release