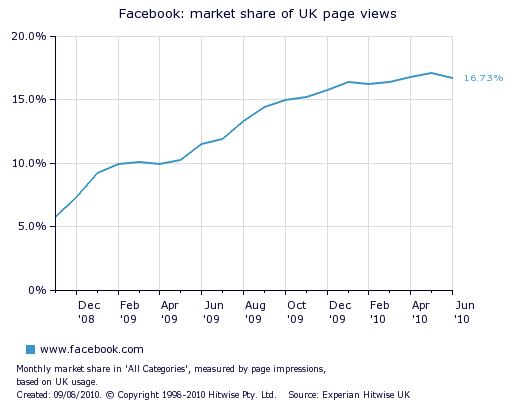 Metrics out from Hitwise today show that growth in Facebook’s marketshare in the UK is slowing and that the social network could be reaching saturation point.

According to the figures, one in six UK pageviews now goes to Facebook. However, after a steep increase over the past couple of years, it appears Facebook could be reaching the point where everyone in the UK who wants a Facebook account has one.

The social network’s market share actually dropped last month. Hitwise’s Robin Goad notes that this could be down to the traditional seasonal lull in Internet traffic seen during holiday periods. Still, there’s a definite flattening of growth visible there. It’s worth noting that a similar ‘flat’ period of growth is visible in Hitwise’s graph in early 2009, meaning that more growth could follow. Still, the analysts’ figures also show that average session times on Facebook in the UK are starting to drop. Should Facebook be worried by this?

Facebook famously has lofty ambitions to reach the one billion user mark worldwide. Having already made it halfway there recently, the push is on to find new markets to explore. It is looking to developing countries for this growth and has recently launched a mobile version of the site which is free of data costs to users in certain countries. This could help push the service into areas of the world where Internet access is limited or expensive.

Even if Facebook is approaching saturation point in the UK – and even if other established markets follow suit, there may well be enough growth potential elsewhere in the world to satisfy CEO Mark Zuckerberg’s desire for the big ‘Billion’.