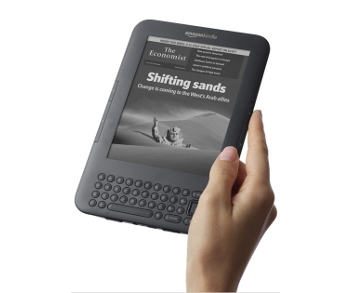 Although its significance got a little lost in the excitement around the announcement of Amazon’s shiny new Kindle last week, the bigger news is that it will be accompanied by a UK-specific Kindle book store.

Although UK customers have been able to buy the Kindle since late last year, they were essentially importing it from the US Amazon store and the same was true of books. Even today, when UK customers log on to the Kindle store (for iOS, Android or the Kindle itself) they’re forced to choose from a limited selection of books from the US store and then pay for them in US Dollars. When the new store launches on 27 August, that will all change.

Amazon has now pushed out an update to its Android app preparing it for the UK launch and something similar can most likely be expected soon for the iOS version too.

Why is the UK Kindle store so significant? It marks the start of the next stage of Amazon’s plan for e-book domination. Kindle is a platform, not just a device. Amazon’s tactic to beat Apple, Barnes & Noble and the other major e-book players is to have your Kindle books working anywhere and everywhere. If I’m at page 23 of a book on my iPad at home, I can be on the train, open the Kindle Android app on my phone it will open on page 23 , exactly where I left off. Being multi-platform and international is the key to making sure that Kindle becomes the default e-book platform.

Having localised stores is an important part of the plan. Sure, only the UK store has been announced so far, but you can bet that Amazon is already tapping on the shoulders of publishers in other markets to strike deals. While Apple already has its iBooks store available in numerous countries, its limitation to only work with expensive Apple hardware limits its appeal.

On 27 August, Amazon takes an important step on the road towards a future it wants to claim as its own.