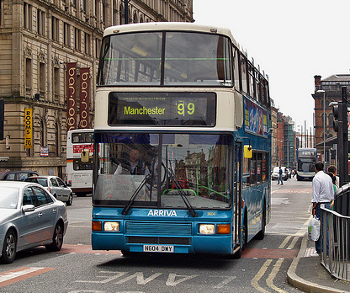 Manchester today becomes the first city in the UK to make bus times available to app developers in a useful way as open data.

As a result of the move, Greater Manchester residents can expect all sorts of apps and mashups to be built around bus travel in the city region.

2010 is shaping up to be remembered as the year of Open Data in the UK. This year has already seen projects like the London Datastore, Data.gov and Transport for London’s recent data release.

The opening up of Manchester’s bus timetable data follows two months of negotiations between FutureEverything‘s Julian Tait and Greater Manchester Passenger Transport Executive (GMPTE) with the support of Manchester Knowledge Capital. “I think that GMPTE want to see what people will come up with the data and are hoping to release more when they are able”, says Julian. “This is a big step for them.”

Although Transport for London’s recent data release was applauded by the Open Data movement, one thing it didn’t include was actual bus timetables. “London’s open bus data doesn’t deal with the bus timings, it only deals with bus routes and stop positions”, says Tait, who is charged with task of helping Greater Manchester’s public bodies open up their data  This means we should see some unique apps emerge in coming months.

Greater Manchester bus timetable data is available from today at the Open Data Manchester Wiki and will be updated weekly.

Read next: Foursquare wants to be "the new age experience provider" for brands