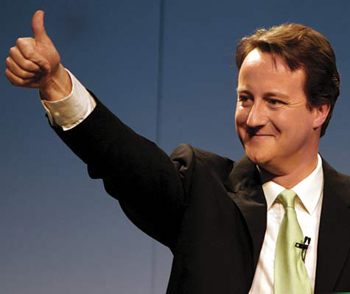 The UK General Election this year has certainly been an interesting one.

British voters saw the first Hung parliament since 1974, and a very delayed decision by the Liberal Democrats to form a coalition government with either the Conservative or Labour parties. However, it finally came to head on May 11th, when Gordon Brown announced he would resign as Prime Minister, meaning Cameron was officially in.

The Internet of course was the first place people went to vent their anger/ excitement when receiving election coverage. As you’d expect, some reactions were hilarious, or raised interesting points. Here’s the highlights.

As with many landmark events, joke websites instantly appeared. One of many is Is Gordon Brown Still Prime Minister?. The site is simple: for the last few days in big white font it has told people whether Brown it still PM with “Only Just” or “No”. You can probably guess the answer, but just in case you were wondering:

Twitter has been a hotbed of debate before, during and after the election process, but after the news of Brown’s resignation and Cameron’s instating, the tweets have been coming in thick and fast. Responses were very varied, with some very interesting twittering going on:

“My mother is now imagining David Cameron doing Hugh Grant’s dance in Love Actually. ‘Jump! For my love, Jump in!’ Haha!”
“wondering what the worst way to start the Obama / Cameron phone call would be #NewPM #UKelection”
“</brown><p><p><cameron>”
“”I believe in public service.” No, David. You believe in public relations. Gordon Brown believed in public service.”
“wonder if Brown did the old cling film over the toilet seat trick at No10?”
“Flirt with Clegg, and you might end up married to Cameron.”
“So, LD Clegg will be in charge when Tory Cameron takes paternity leave thanks to Labour policy. There’s interesting #ukelection”

Facebook also saw great growth in groups, some congratulating Cameron on his new role, others commiserating Brown on his resignation and others just plain bizarre. Weirdest Facebook page has to go to Gordon Brown is secretly a Bulbasaur. A Bulbasaur being a type of monster from game series Pokemon. Odd, but the page picture is actually quite accurate:

For those thinking this is unfair on Brown, don’t worry, Cameron has one too:

In response to the newly elected PM, those that were not thrilled about the news turned to the Labour Party’s website, where “record amounts” of people tried to join the party (though this could be a final spin attempt), causing that section of the site to go down. The message “A record number of people are currently trying to join! Please try again in 5 minutes.” was all that can be found.

Those behind exitpol.ly will be left feeling a bit redfaced this week, due to their prediction that people would vote 51% Liberal Democrat in the election. As it happened, only 23% of those who turned out voted for the Liberals, with the Conservatives taking 36% of the votes.

Have you come across any interesting websites or comments throughout the election? Be sure to tell us in the comments below.