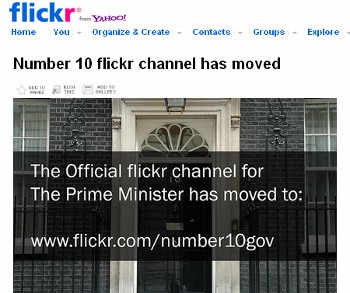 New UK prime minister David Cameron had barely been accepted by the Queen last night when the government changeover began.

Forget announcing the new cabinet, forget even changing the curtains; one of the first changeovers to take place was to switch over the 10 Downing Street social media accounts.

The official governmental Twitter, Flickr and YouTube accounts moved over to the new shared username ‘Number10Gov’. Cameron’s web team immediately set to work uploading photos and video from his arrival at the prime ministerial residence.

While some may bemoan the change of usernames (it’s the same house, regardless of the government in charge), it show just how seriously social media channels are taken by the government that they were one of the first things to be changed.

Read next: Fly a (Bright)kite into a Starbucks near you