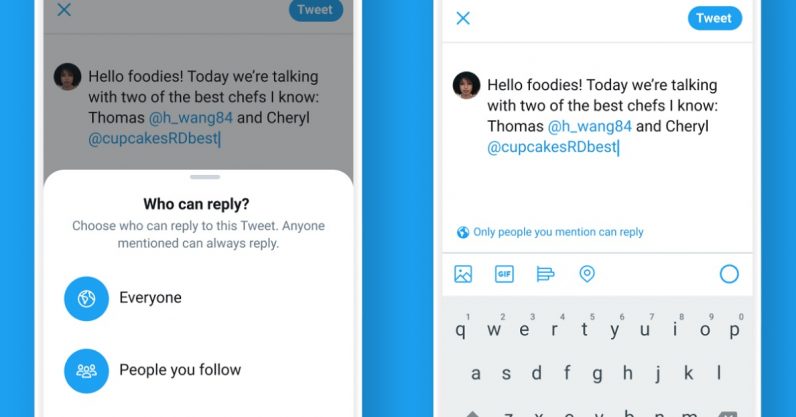 Twitter today revealed it’s testing a new feature that allows users to select who will be able to reply to your tweets before you send them.

A new way to have a convo with exactly who you want. We’re starting with a small % globally, so keep your 👀 out to see it in action. pic.twitter.com/pV53mvjAVT

It’s pretty straightforward, from what we can tell. It seems to work a bit like Facebook — you’ll see an option on your tweet that tells you who can reply to you. Select this and you’ll be able to limit it to people you follow, or to only the people you mention in the tweet. If you don’t mention anyone in the tweet, that last option will effectively keep anyone from replying. For any tweet like this, anyone who doesn’t fall within the permitted group will see the reply button greyed out on the tweet.

Note that this won’t stop anyone from quote-tweeting, retweeting, liking or seeing the tweets in question. Susanne Xie, Twitter’s director of product management, dared anyone who has the feature to “host a debate on the benefits of pineapple on pizza (#TeamPineapple) with fellow pizza pals.” Holy cow, Susanne, I only want to tease people who can’t reply, not drive them into nuclear meltdown.

There’s an obvious benefit, in that it’ll help you limit the tweet and subsequent discussion to a list of people who will add something — instead of, say, the people who respond to every Twitter update by begging for an edit button despite Jack Dorsey himself saying it ain’t gonna happen. Presumably this is part of Twitter‘s initiative to help people control their conversations. Last year, they rolled out a feature that lets you hide replies to your tweets, so this is another form of the same kind of moderation.

It’s still a test, obviously, so only a small group of people have access to the feature right now. But those who do… oh boy, are they abusing it.

Time to try out this new Twitter feature……. Shadow of the Colossus is a boring video game

Jason, you are playing with fire here.

1. Tomatoes don’t belong in sandwiches (including hamburgers) or salads.

5. Anyone who overcooks their eggs or meat should serve prison time

Okay, I admit Yashar is right about all of this — except the banana bread. What kind of monster…?

Read next: EA to release source code for Command and Conquer's Tiberian Dawn and Red Alert