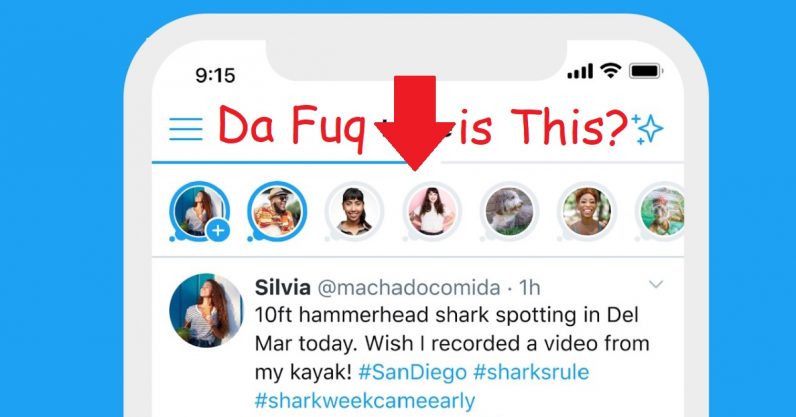 Twitter today revealed it’s testing its own version of ephemeral updates… a.k.a. Stories (because apparently the “rip off Snapchat” train is still chugging along). I can barely find the words to express how little I want this or how un-Twitter it seems.

We’ve been listening to this feedback and working to create new capabilities that address some of the anxieties that hold people back from talking on Twitter. Today, in Brazil only, we’re starting a test (on Android and iOS) for one of those new capabilities. It’s called Fleets. pic.twitter.com/6MLs8irb0c

The idea behind Fleets, according to Twitter Product Lead Kayvon Beykpour, appears to be to give people the opportunity to tweet thoughts they’re not comfortable having a permanent part of their timeline. Tweets are always public (unless your account is protected), and anyone can retweet or like them. Apparently people also feel they’re “performative” in that you have to post that which will give you maximum likes and retweets. Fleets is an attempt to redress that, though it should be pointed out that “anyone who can access your full profile will also be able to find your Fleets there,” so it’s not like they’re actually private.

Fleets will appear in a row at the top of your feed, with people who you follow and who follow you appearing first, and other accounts you follow coming next. In other words, Instagram’s setup. Twitter intends for them to be text updates, though you can add photos if you wish. As is typical for Stories, they vanish after 24 hours.

Okay, I know this was the fashionable thing to do a couple of years ago, but I thought we’d all come to the conclusion that only Snapchat and Instagram are really set up to do the whole Story thing? I mean, everyone and their dog was ripping off Snapchat left, right, and up the middle, and those are still the only two instances where it’s proven to have lasting popularity. That is to say, where it’s stuck because of user interest, rather than because publishers are trying to brute-force it to stick.

I know what you're thinking: “THIS SOUNDS A LOT LIKE STORIES!”. Yes, there are many similarities with the Stories format that will feel familiar to people. There are also a few intentional differences to make the experience more focused on sharing and seeing people’s thoughts. pic.twitter.com/OaGYZpChcN

I get the idea behind it: sometimes you just want to tweet a weird thought without it becoming a permanent part of your timeline, but a form of text update that can’t be liked, retweeted, or publicly replied to feels a little pointless. What am I, the theoretical viewer of Fleets, intended to do with what they contain? Be happy that the people I know are still alive and move on? Fleets can be replied to with an emoji, so I guess that takes away the notion that they aren’t performative. Users can also DM you a reply… though I presume they won’t be able to do that if your DMs are locked.

There’s also the name: “Fleets.” At first I thought that was just something that didn’t get translated properly from the original Portuguese announcement. But nope, apparently that’s the name they’re choosing to go with. It’s supposed to be a mash-up of “fleeting” and “tweets,” would be my guess, but that’s… not the first thing I think of when it comes to that name. And given this tweet, apparently I’m not the only one.

yes we know what fleets means. thanks – gay intern

Twitter will be testing Fleets in Brazil, and might expand the test to other countries depending on what kind of feedback it receives.

Read next: Thanks, coronavirus: Apple reportedly has few replacement iPhones to go around