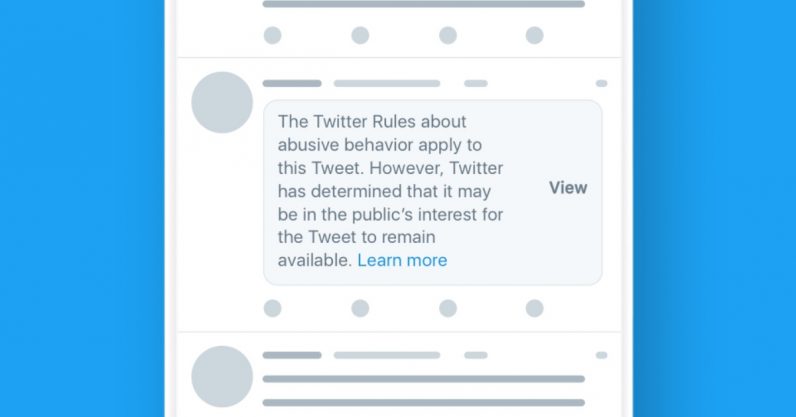 Twitter revealed today it will be adding a special label to certain tweets — namely those that violate Twitter’s terms of service, but which somehow serve public interest by remaining up. To be clear, Twitter’s been leaving such tweets up for quite some time — now it’s just managed to find a happy medium between appeasing important users and keeping Twitter safe for everyone.

According to Twitter‘s blog, the company has allowed tweets from public figures to remain up, even if they are clearly in violation of Twitter‘s terms of service. That’s not new — but it’s apparently decided that such tweets should be both clearly marked, and partially hidden (which feels like an oxymoron). The violating tweets will now come with a label marking them as such — you can see an example in the picture above.

But to ensure the violating tweet won’t be front and center, Twitter will remove the tweet from safe searches, notifications, and explore. You’d still be able to see the tweet on their timeline with the aforementioned labels.

We‘ll now clearly label any tweets which violate our terms of service but decide to keep up due to public interest. https://t.co/0jxS7GrARy

The rules for what kind of tweet this would apply to are a bit broad. Twitter will leave the tweets up if they provide context, or are needed to hold someone accountable, or if it offers a unique perspective. I feel as though that could describe just about anything.

It’s worth noting this won’t apply to just any random yahoo. According to the rules, to be considered for this label, the user in question must be verified, have over 100k followers, and “Be or represent a government official, be running for public office, or be considered for a government position (i.e., next in line, awaiting confirmation, named successor to an appointed position).” It’s also specified that anything constituting a threat against someone in particular is not considered to be of public interest.

Initially, it wasn’t clear what Twitter would do if the user themselves wanted to delete said Tweet. A Twitter spokesperson clarified that user-deleted tweets will go away, meaning public figures and leaders who wish can erase their controversial words themselves.

Twitter insists it’s not going to be a common thing, and it could be years before any Twitter employee will have to use it. I’m not unsympathetic to Twitter’s desire to find a middle ground between not ruffling the feathers of important people and making everyone to comply with the rules — and maybe this is as good as it’s going to get.

Read next: Here’s why your Microsoft Store ebooks won’t work next month