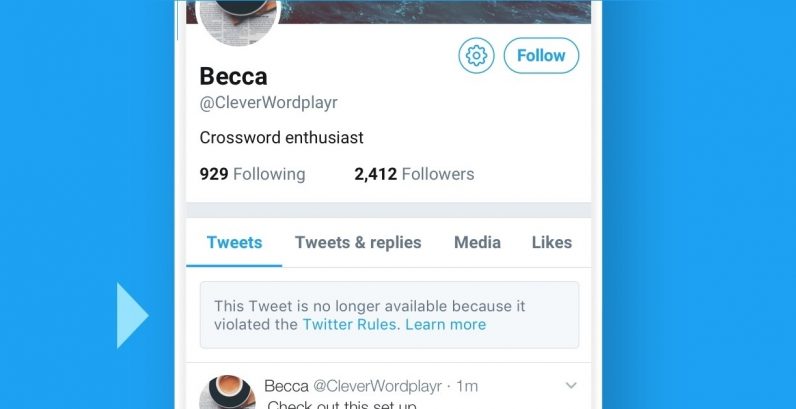 Twitter recently announced it’s rolling out a feature to provide context around deleted tweets – including who deleted them and why. It’s a small change, but it’s the latest in a series of moves Twitter is making in an effort to bolster transparency.

Up to now, deleted tweets would be gone, with no explanation as to whether they were removed due to rule violations or whim. Now, users who look at a deleted tweet — and the tweet was deleted at the behest of Twitter‘s moderators — will see a message saying the tweet is no longer available because it violated Twitter‘s rules. The message remains for up to 14 days after the tweet’s deletion.

Deleted tweets display the same message, regardless of whether they were removed by the user or the moderators. In either case, any links to that tweet are simply 404’ed, while the tweet itself is no longer visible in the timeline. Now when users search for a tweet that has been recently deleted, they’ll instead see a message from Twitter that reads out how the Tweet is no longer available because it violated the ToS.

By itself, it’s not the most impactful change. But it’s part of Twitter‘s overall effort to increase transparency when it comes to moderation. The site has not only come under fire for its ineffective handling of election manipulation, but also for its apparently biased handling of political tweets.

The other major change when it comes to problematic tweets is that users who report a tweet now no longer have to see it unless they wish to. When they come across a tweet previously reported, it will be greyed out with a View button.

Both changes will be rolling out to all users over the coming weeks.

More clarity on reported Tweets and enforcement on Twitter

Read next: Apple's next event is on October 30, probably for new iPads and Macs