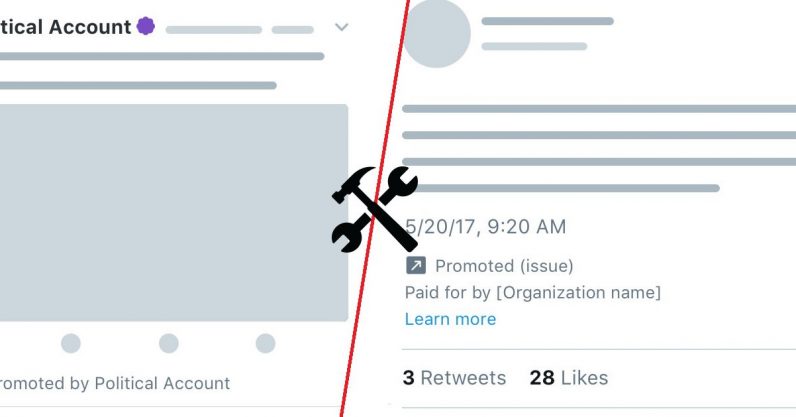 Twitter announced it was making a change to its policy on political ad tweets, and in doing so it’s fixed on of the biggest problems with those promoted tweets — namely, that the information about them wasn’t easily accessible.

The policy applies to ads that “advocate for legislative issues of national importance,” such as gun control, climate change, abortion, immigration, national security, and the like. Now those ads will be marked with a label such as this:

See that blue hyperlink that says “Learn More”? That right there fixes a heretofore unaddressed problem with political ads on the site.

When Twitter first announced it’d be increasing transparency by putting all the information on promoted tweets in a separate Ad Transparency Center, it was a good move. Given the amount of scrutiny Twitter was under, and continues to be under, for its sketchy tactics with regards to fake accounts and ads, putting all its cards on the table was probably the best way to help foster better trust in the platform.

My biggest issue with this was that, while transparency is all well and good, the information being sequestered in the Center meant that most people would never see it. People aren’t likely to search this stuff out themselves — you need to do some handholding. If Twitter wanted people to see who’s paying for these ads, it needed to somehow make this info available in the ads themselves.

Now it seems Twitter‘s fixed this big problem. A Twitter spokesperson has confirmed to TNW the “Learn More” hyperlink on these tweets goes directly to the Ad Transparency Center, meaning Twitter users can more easily access the information.

In addition to clearly marking these ads, Twitter now requires organizations seeking to promote tweets about these issues to be certified. They’ll have to confirm their identity and location within the states, and meet certain criteria the company hasn’t specified exactly. I checked out the application, and two of the things they require are a photo ID and valid contact info.

This feature is currently limited only to US users, but Twitter says it’s working on expanding its policies globally. It also specified ads which promoted journalistic coverage of political issues would be exempt — though the news organization would have to apply and meet certain requirements to be granted that leniency. The policy will be enforced starting on September 30.

Read next: Apple makes a splash in the AR space with its newest acquisition