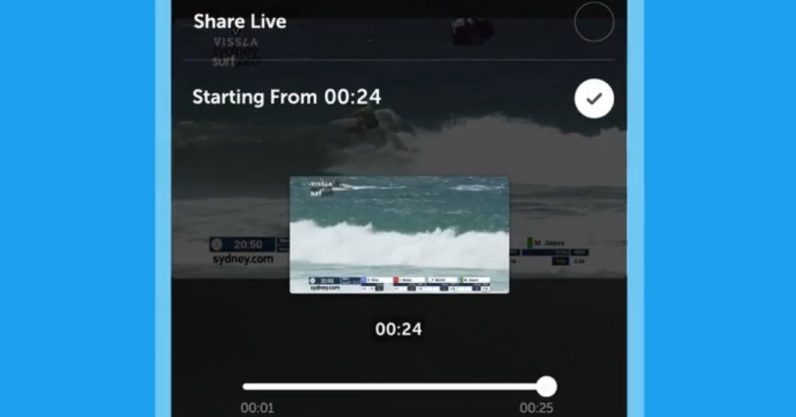 Twitter today introduced Timestamps, which allows users to share both live videos and recorded ones from a certain point. It’s essentially the same as the timestamp option on YouTube’s share button. Timestamps roll out today for the iOS and Android apps, as well as Periscope.

According to Twitter, it implemented this feature in response to users’ frequently tweeting a whole video with a number indicating where in the video they wanted the viewers to start. Now anyone who views a tweet will see the video starting from the timestamp selected.

Timestamps help improve the conversation around news, as it allows people to cut directly to the parts of the footage most relevant. It makes sharing thoughts and ideas easier and more fluid than it has been on Twitter to this point.

For example, if I wanted to talk about a memorable quote from a speech broadcast on Twitter before now, I’d have to link to a video and give the appropriate start time. Now I can just link to the part of the video where the speech begins.

Twitter has embraced video over the past several months, incorporating it into the site’s breaking news coverage and brokering deals with major sports networks. You’re now just as likely, if not more, to see on-the-spot live news coverage on Twitter as you are on Facebook, as news networks now post hundreds of videos to Twitter every week.

Up to this point, Twitter’s primary rival for social media video space was Facebook. But with the introduction of Timestamps, Twitter has given itself an edge that Facebook won’t be able to duplicate. Even if Facebook introduced timestamps of its own, it doesn’t have the same scope that Twitter does, for all its Live video features.

Twitter’s timestamps are an ingenious way to start discussions about live broadcasting and coverage. Any attempt Facebook makes to bolster its Live video streams aren’t going to be as useful.