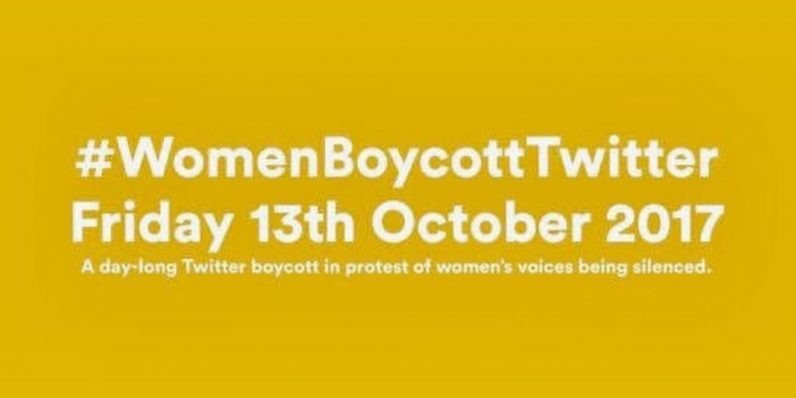 Users across Twitter are absenting themselves from Twitter today following the social media site’s banning of actress/director Rose McGowan.

McGowan has been vocal on Twitter during the Harvey Weinstein rape scandal currently rocking the entertainment industry. She’s tweeted the names of several people who knew — or should have known — about Weinstein’s alleged attacks on women, as revealed by a recent New Yorker exposé.

Hey @mattdamon what’s it like to be a spineless profiteer who stays silent? pic.twitter.com/rp0OrRrpqJ

Earlier this week, McGowan posted on Instagram a message from Twitter informing her that her account was locked and would be until she deleted certain tweets.

TWITTER HAS SUSPENDED ME. THERE ARE POWERFUL FORCES AT WORK. BE MY VOICE. #ROSEARMY #whywomendontreport

According to Twitter, one of McGowan’s tweets contained a private phone number, and this violates their policy against doxing.

We have been in touch with Ms. McGowan's team. We want to explain that her account was temporarily locked because one of her Tweets included a private phone number, which violates our Terms of Service. 1/3

As several people pointed out, Twitter enforces these rules very unevenly. For example, Fox anchor Lou Dobbs doxed Jessica Leeds, a woman who accused Donald Trump of groping her, by retweeting a tweet that contained her number and address. To my knowledge, Dobbs was never suspended, though the tweet was eventually deleted.

Today, women are boycotting the platform en masse in protest of McGowan’s ban. The trend appears to have began with software engineer Kelly Ellis:

Individuals opting out doesn't seem to make a dent. What if #WomenBoycottTwitter for one day (along with men who stand with us?)

And now advocates include McGowan herself and several other actors, men and women, with several Twitter users voicing their support and intent to participate.

Tomorrow (Friday the 13th) will be the first day in over 10 years that I won’t tweet. Join me. #WomenBoycottTwitter pic.twitter.com/xoEt5Bwj5s

There has also been a push to do the exact opposite, from those who don’t find this an effective form of protest.

I support women – I am one last time I checked. I don’t think voluntary silence is the way to protest forced silence. #womenboycottwitter

Others protest the movement, saying Twitter users were not so quick to side with less visible figures who were also given the same treatment.

Calling white women allies to recognize conflict of #WomenBoycottTwitter for women of color who haven't received support on similar issues.

Personally, while I don’t tweet every day, I don’t know if I’d actively keep myself off the platform today. One of the ugliest details of the Weinstein case was the apparent quashing of the victims’ stories. I don’t believe me voluntarily removing myself would help the women who’ve suffered at the hands of powerful abusers.

Instead of #womenboycottwitter why don't we bombard twitter. Give it hell. Get all up in it's face. Make some noise. Be brave. Fuck shit up.

That’s only my opinion, of course.

Read next: Giant robot fighting is finally here as America and Japan do battle