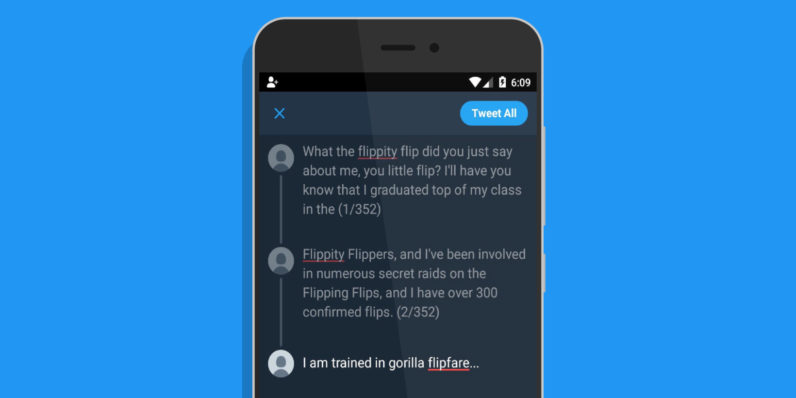 What do you do when 140 characters just aren’t enough to express your ideas on Twitter? Launch into a full-on tweetstorm, of course. While it’s fairly easy to do already, the company is looking to make it even easier with a new feature it’s testing in its Android app.

For those out of the loop, a tweetstorm is simply a thread of tweets that follow the same topic or conversation. You can whip up your own simply by tweeting and then replying to that tweet to get started; then, you’ll need to reply to each tweet in succession to keep the thread going. Repeat as many times as necessary.

Now, a Twitter user who goes by the alias Devesh Logendran shared screenshots of a built-in tweetstorming feature with TNW, that appears to automatically split text up into individual tweets and appending a tweet count at the end.

With this, Twitter could effectively do away with the character limit, as far as the experience for users is concerned. The 140-character restriction can seem daunting to new users who may be accustomed to services that don’t limit text posts, so this might also help them get on board the Twitter train more easily.

Twitter refused to comment on the feature, but hopefully it’ll arrive on the service’s mobile apps sooner than later. Until then, you can use Storm It on Android and iOS to create, preview and publish tweetstorms like a veteran.

Read next: The cryptocurrency market is maturing, not stalling