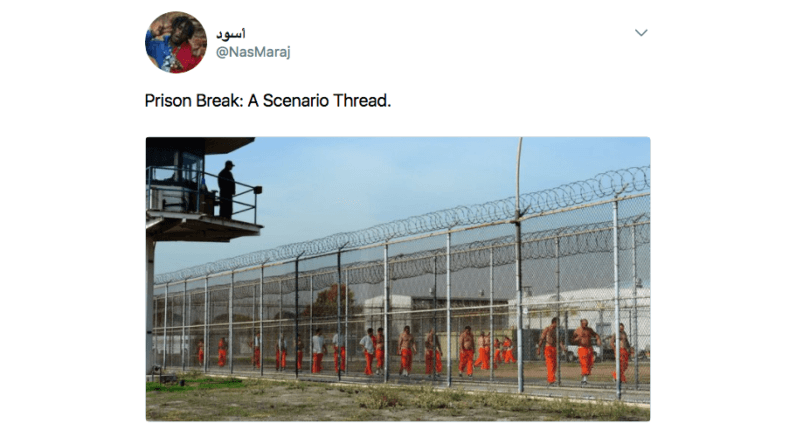 Numerous esteemed authors have previously relied on Twitter to tell original Flash fiction, but one talented storyteller is pushing his tales way beyond the 140 character limit to create interactive scenarios that put you in charge of the story.

Artist Nas Maraj has created a truly engaging story format which combines the thrill of literary fiction with the choice-based storytelling of games. The unusual format essentially serves to transform a series of tweets into an intricate storyline with multiple forking sub-narratives – each taking the story to unknown direction.

To make this work, Maraj breaks down the numerous plot twists into smaller narrative points, where users are presented with choices. While each choice will bring readers closer to an ending, not every option leads to a fulfilling closing: much like literary interactive fiction, some endings tend to be much more compelling than others.

In fact, chances are you will often find yourself going back and amending your choices to discover where the other choice available could have taken the story to.

In case you were wondering how this looks, here is a little sneak peek at Maraj’s latest interactive piece, The Prison Break Scenario Thread.

Maraj often opens by setting up the premise of the story with a series of descriptive tweets:

Pay very CLOSE attention. The system failed you. You're now in a Prison with 3,484 inmates. This is your last chance of escape.

Once the setting has been established, the artist usually goes on to prompt readers to make a choice in order to advance the story:

All of the doors open and the inmates at your block run to the left. Are your going with the crew or are you going right by yourself.

Users are then presented with two story alternatives based on their choice; in this case, one takes them to the left…

Each option then takes you to a separate thread that advances the narrative you’ve decided to pursue. All narratives tend to follow the same choice-based structure until you eventually reach one of Maraj’s intended endings.

This is hardly the first time Maraj has used Twitter to narrate his riveting tales. The cryptic storyteller has previously put together other interactive pieces, including the prequel to his Prison Break scenario, The Bank Heist.

Eager to embark yet another fictional Twitter adventure? Click here to get started with The Bank Heist.