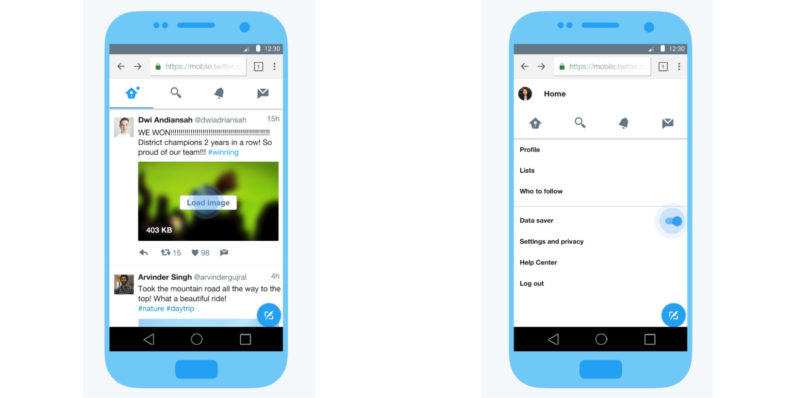 In an effort to reach more users in countries with slow cellular networks, Twitter has launched a Lite version of its microblogging service, which works on any phone through the browser and promises to load quickly and save on data consumption.

Available at mobile.twitter.com, Twitter Lite offers a slightly pared down interface as compared to the company’s mobile apps. For example, it still lets you view and upload media in tweets, but you’ll miss features like photo editing and livestreaming.

There’s a Data saver feature that you can turn on in the settings menu to load lightweight previews of images and help you save up to 70 percent on data usage. Plus, you can add a shortcut to the mobile site to your Android home screen and enable push notifications to mimic the mobile app’s behavior as well.

The company explained that the 1MB app is essentially a JavaScript program that’s paired with a Node.js server for authentication and loading up the app shell. Once that’s ready, it connects to the Twitter API to deliver tweets and media content.

Even though I’m usually on Wi-Fi and 4G connections, I enjoy using Twitter Lite over the standard app simply because it’s a lot snappier. I also don’t use some of the features on the full-fledged app, so I’m fine sacrificing those for faster loading tweets.

Twitter’s offering for data-starved users comes two years after Facebook launched its own Lite app, which crossed 200 million users this February. Last March, the company added a feature to enable video playback on slow connections and even released a Lite version of Messenger.

The new mobile site is available globally, and you can try it out right now.

Read next: Facebook's social network for businesses will soon be available for free