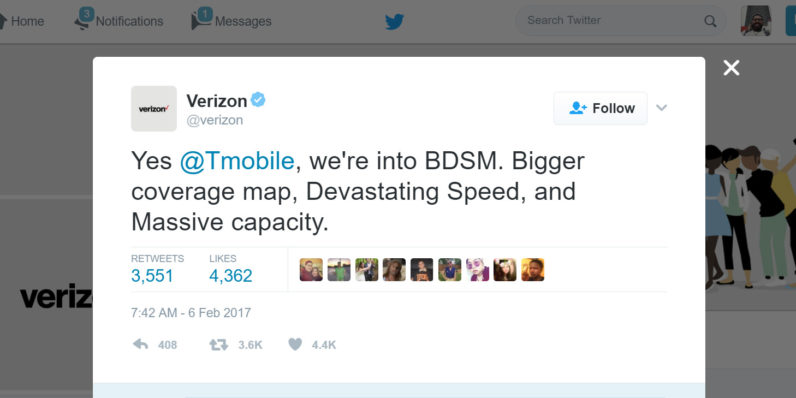 While the New England Patriots were busy taking down the Atlanta Falcons at this year’s Super Bowl, mobile carriers T-Mobile and Verizon decided they had better things to do than watch the game – like throwing shade at each other on Twitter in the strangest way possible.

A bit of background: T-Mobile just launched a new campaign starring comedian Kristen Schaal that hits out at Verizon over its various overages.

❤️ you @Kristenschaaled but if you want the pain of overages, @Verizon can provide lots of it. #TMobileONE =no pain! #TheSafeWordisUnlimited pic.twitter.com/7MiwtbnuCN

That was followed by a tweet from Schaal that was likely aimed at kicking off a war of words between the two brands:

.@Verizon overages hurt so bad. Do you punish your customers that way, @TMobile? #TheSafeWordisUnlimited

Then came this reply from T-Mobile:

Sorry @Kristenschaaled but with our UNLIMITED network, you won’t feel the pain of overages. Can we still be friends? #TheSafeWordisUnlimited https://t.co/ZpZpMqMqdS

Not to be outdone, Verizon returned fire with these zingers (cover your eyes, kids):

Unfortunately no one will hear your safe word if you're on @Tmobile. 🤐

T-Mobile CEO John Legere wanted to have the last word, so he went with this:

.@verizon guys… it can't go any further. calm down. pic.twitter.com/jINXguIUAD