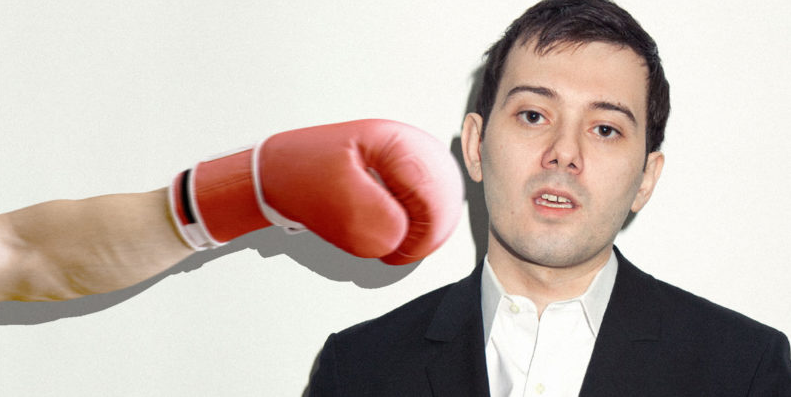 The ‘pharma bro’ is out. Twitter confirmed it has temporarily suspended Martin Shkreli after the former hedge fund manager targeted Teen Vogue writer Lauren Duca in a rash of tasteless and abusive posts.

The vilified pharmaceutical executive – who came to notoriety after making life-saving HIV drug Daraprim virtually unaffordable – purportedly began his abusive streak last Thursday when he sent Duca a direct message, asking her to accompany him as his “+1” to the inauguration ceremony of President-elect Donald Trump.

I would rather eat my own organs pic.twitter.com/IgeCRZqk8w

Despite having his advances publicly turned down, Shkreli remained relentless in his pursuit of Duca’s “unrequited love” – and things quickly got creepy.

In addition to changing his Twitter bio to read that he has “a small crush on @laurenduca,” the entrepreneur proceeded to update his header image with a collage of various photos of Duca, covered with romantic lyrics from John Michael Montgomery’s single 1994 ‘I Swear.’ He also tweeted he had acquired the domain name “marrymelauren.com.”

But the kicker came from the pharma bro’s new profile pic. Shkreli updated the photo with a photoshopped image of Duca and her husband, replacing her partner’s face with his own.

Following in his footsteps, a bunch of Shkreli fans began to amplify the harassment against Duca, trolling her with a barrage of doctored images and memes.

@MartinShkreli you guys are hella cute together https://t.co/eJbSJBUExY like I dont understand why she keeps pretending she's not interested

This is when Duca decided to take matters into her own hands and reach out straight to the powers that be, notifying Twitter CEO Jack Dorsey about Shkreli’s prolonged abuse.

How is this allowed @jack pic.twitter.com/Wof8MlYHTL

While the reasons remain unclear, Ars Technica speculates Shkreli might have targeted Duca due to an editorial she penned earlier in December.

Taking aim at Donald Trump – who the former pharmaceutical executive has kind-of endorsed in the past – the piece castigates the new President-elect for his blatant disregard of truth and manipulative dissemination of false facts.

This is hardly the first time Twitter has struggled to moderate abuse on its platform.

Back in July, Twitter gave controversial rightwing writer Milo Yiannopoulos the boot after the infamous internet troll ushered in a wave of targeted abuse to Ghostbusters star Leslie Jones. Similarly to Duca, Jones made an attempt to deal with the slew of hateful reactions herself before eventually resorting to the assistance of Dorsey himself.

What is more concerning is that, while Twitter was quick to come to the rescue, in both cases the abuse persisted even after the originators of the harassment were suspended.

Much like in the case of Jones, Duca has received numerous disturbing messages blaming her for Shkreli’s temporary ban and threatening to publicly reveal private details about her life.

At least he’s putting his education to use? pic.twitter.com/8T208anpnJ

As the cases with Yiannopoulos and Shkreli demonstrate, this sort of ‘monkey see, monkey do’ mentality exhibited by a limited number of Twitter users is unfortunately not a one-off occurrence – and it is truly toxic to the platform.

Despite rolling out numerous features to battle online abuse, the social media giant has repeatedly struggled to viably curb harassment on its website – and so far to little avail.

While being harassed online is undeniably traumatic, public figures like Duca and Jones are at least fortunate enough to have a profile strong enough to leverage in their defense – an advantage most Twitter users can’t rely on.

Overlooking harassment is simply unacceptable – regardless of the celebrity status of its victims – and it’s high-time Twitter start recognizning this.

Read next: Razer's incredible CES prototypes got stolen... because people are dicks