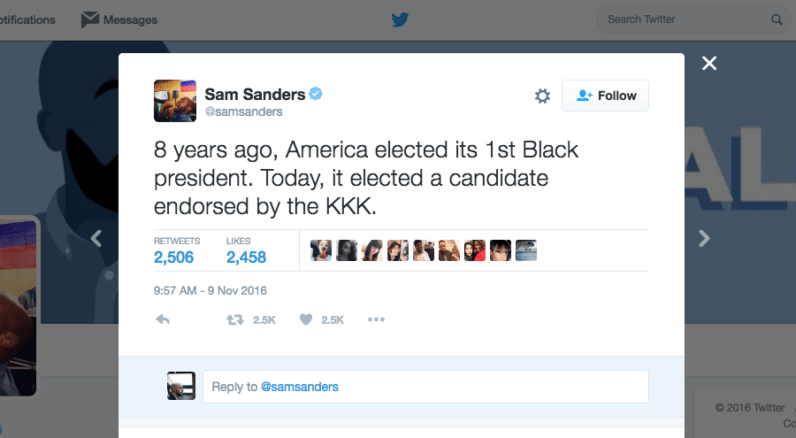 Believe it or not, it’s official: Donald Trump is now the president-elect of the United States of America.

The victorious Republican candidate trumped Hillary Clinton by a huge margin, clinching the presidential spot with over 275 electoral votes across states and denying the Democrat a historic moment in what could’ve been America’s first woman president.

Trump’s less than expected political triumph did not go unnoticed by the Twitterverse, spurring a heated debate between voters as well as a barrage of emotionally-ridden reactions – both happy and sad.

In the after-hours of Trump’s defeat over Clinton, thousands of people took it to Twitter to voice out their opinion of what will likely go down as one of the most controversial election runs in US history – and they had a lot to speak up about.

So without further ado: Here’s all the joy and pain from the 2016 US election as it unfolded in tweets.

Russia and President Vladimir Putin were among the first to congratulate the Democrat on his victorious campaign.

Congratulations to Donald Trump on winning the #US presidential electionhttps://t.co/RV3E5zFRO5
🔴 @realDonaldTrump

We all need to give President-Elect Trump a chance. Support the good. Lobby against what we disagree on. No one is bigger than us all

And while some got it right…

… I’m not so sure about others.

With #DonaldTrump as our next President we will have safer borders & stronger national security policies for future generations to come.

But it wasn’t all cheers and applauses for Trump.

8 years ago, America elected its 1st Black president. Today, it elected a candidate endorsed by the KKK.

This isn't an episode. This isn't marketing. This is reality.

Did I miss where Trump said he'd be putting minorities in camps? No? Guess it was your beloved media cretins spewing hyperbole

To trump and his supporters..my president is black and …. pic.twitter.com/mZ9OzwUS1z

In midst of the heated discussion, many saw an opening to show off their humour.

Frank Underwood would have assassinated Trump before it got to this stage.

The Brits also had a field with America’s own Brexit.

BRITAIN: Brexit is the stupidest, most self-destructive act a country could undertake.
USA: Hold my beer.

Well, at least now the UK no longer holds the award for craziest, most self-harming hit-yourself-in-the-face nation. #USElection2016

And while most were busy celebrating, ranting and tossing around one-liners, others were just straight-up baffled.

I will never forget this chart for as long as I live. pic.twitter.com/7Y4t4o65gp

People are going to study this @nytimes graph for decades pic.twitter.com/JkmkA0M1J8

How do you feel feel about the outcome of the 2016 US election? Let us know down in the comments and don’t forget to share some of the most memorable things you noticed about Trump’s presidential victory.

And in case you have some time to waste: Make sure to also check out our roundup of the best tweets prior to the election.

Read More: Why Trump will be the most technology-illiterate president ever

Read next: OnePlus will announce its latest phone on November 15