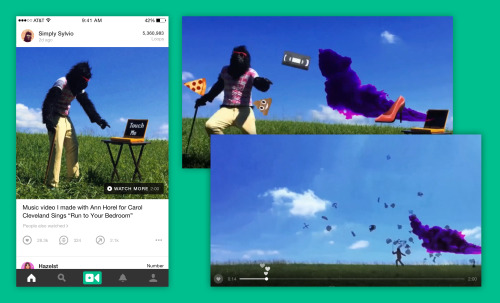 Evolution is inevitable for social media platforms: as they become part of our digital landscape, they have to keep tabs on how people are using them and meet those expectations to stay relevant.

But Vine – which was acquired by Twitter in 2012 and has since grown to more than 200 million monthly users – is changing in a way that might alienate its audience. And that’s not good for business.

The app, which lets people post and view six-second-long videos, now allows clips up to 140 seconds in length. That’s about as drastic a shift as one could ever expect, given the wide range of video-focused apps out there seeking to differentiate themselves from the competition.

In trying to understand why some social apps stick and others fail, I realized that the successful ones challenge you to express yourself in a unique way. For instance, Twitter does that by inviting you to share clever thoughts in 140 characters or less.

Vine is the same way: its six-second format encourages you to figure out inventive ways of sharing a story or making people laugh in a short span of time.

That format shapes our expectations from the content we come across, and it becomes a major part of the social network’s identity.

Enabling longer videos on Vine means that other sorts of video content will begin to show up on your feed. The challenge is no longer the same, and the quick bursts of entertainment and enlightenment you were familiar with will now be replaced by trailers for 140-second clips.

The trouble is, there are other places you can go to enjoy longer videos.

For its part, Vine says its decision was influenced by feedback from creators. But I fail to see how I’d enjoy the new format more than video on Instagram or YouTube.

Vine’s six-second restriction was a novel constraint that forced creators to think differently about how they’d tell stories. By changing things up, it’s trying to be more like other apps that are out there and as a result, will cease to offer a truly unique experience.

I’m happy to be proven wrong – I’d love to see creators on Vine figure out new ways to play with the latest format and create interesting content. But if I hadn’t used Vine until now and approached it with fresh eyes, I might not see the appeal of it.

Read next: YouTube was down for the first time in ages