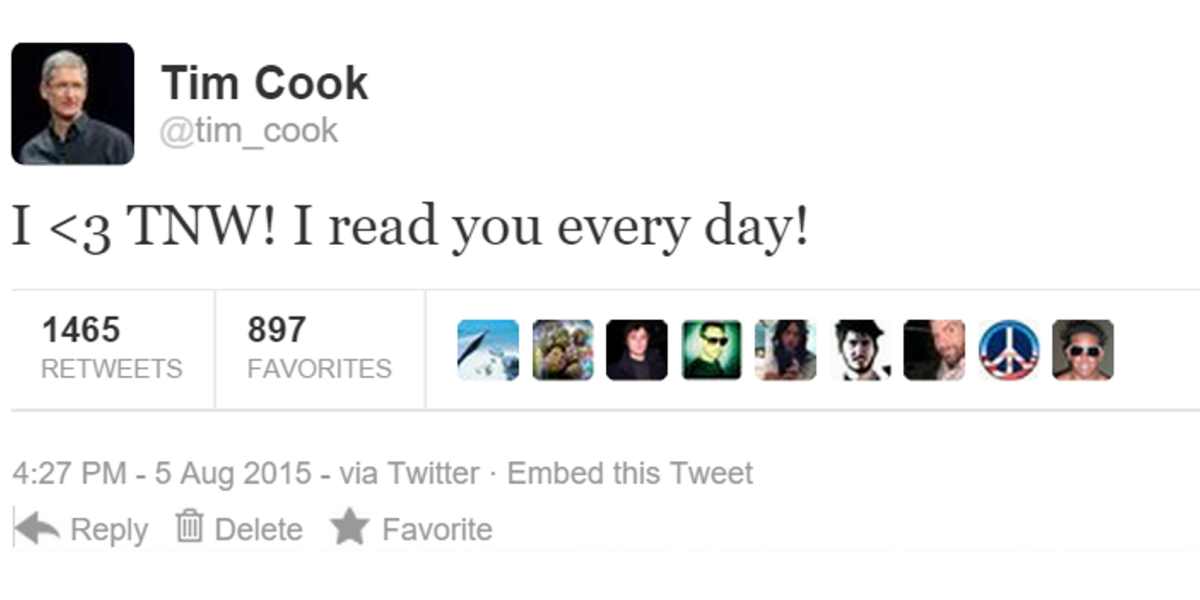 While it’s possible that TNW’s Editor-in-Chief Martin Bryant really does think I’m “the *best*”, it’s more likely that the image below (and above) is in fact a fake tweet made with a free online service.

But you’re the sort of Web-savvy person who spotted that was an image rather than an embed straight away anyway, aren’t you? Think on this though: Even if you are, the embedded tweets that you’re seeing aren’t necessarily real.

As pointed out by Amit Agarwal on Labnol, there’s a way of embedding tweets using JavaScript that allows you to alter many of its properties, including the font family, favorite and retweet counts, the date and even the content. Essentially, you can change pretty much anything about it.

To do so, you need to copy and paste the JavaScript code snippet into your page, making sure to change the “tweet ID” to the ID of the tweet you want to alter.

What you end up with is an embedded tweet that looks legit, but says whatever you want – it still links through to the original tweet on Twitter though.

With the increase in the amount of news sourced via social channels, double-checking that the tweets or embeds you’re looking at is as essential now as it ever was.

And even if an embedded comment says one thing when it’s posted, if you’re dealing with Reddit, you’ll want to be careful as they’re editable after the fact.

You just can’t trust anything nowadays.

Read next: Uber denies it shows fake cars in app to trick customers

Read next: Graava camera will automatically capture and edit your tedious holiday videos