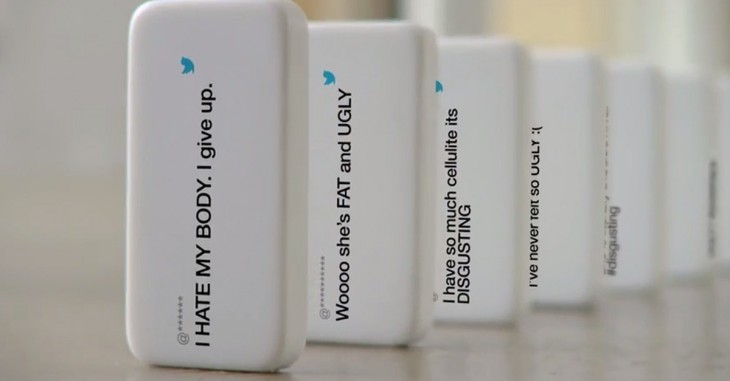 Dove’s known for ad campaigns that claim to empower women. For its latest effort, the beauty company isn’t focusing on any one body part. Instead, it’s trying to stop women being negative about each other and themselves on social media – for one evening, at least.

It’s not the only company concerned about unpleasantness online. Twitter’s own CEO, Dick Costolo, addressed the issue in an internal memo, which was obtained by The Verge: “We suck at dealing with abuse and trolls on the platform and we’ve sucked at it for years.”

So Twitter and Dove have teamed up to throw a curve ball into the stream of critical tweets that will flow during the Oscars. As part of the campaign, called #SpeakBeautiful, the video below will air during the pre-show.

This attempt comes not long after Coca Cola tried a similar stunt during the Super Bowl. Its #MakeItHappy campaign encourage people to respond to negative tweets with the hashtag and used an automate algorithm to turn them into cheery ASCII art.

It didn’t go as well as the company might have hoped. Gawker created a Twitter bot (@MeinCoke) which tweeted lines from Hitler’s autobiographical manifesto Mein Kampf with the hashtag.

The result was that Coke tweeted images made up of sections of the racist text for hours before the campaign was pulled entirely.

It was naive of Coca Cola to rely on an automated system. Dove’s turning to actual human beings , who it’s calling “self-esteem experts”, to send replies to negative body image tweets on Sunday night.

The company’s video claims women sent over five million negative tweets about body image last year, so the campaign could be a good thing. However, with it being aimed solely at women and solely about body image, perhaps the infamous Victoria’s Secret Fashion Show would have been a better fit.

Plenty of men will also be attending the Oscars and watching at home. Excluding them from its efforts makes Dove’s promotional intent more apparent.

That said, if it makes people, regardless of their gender, tweet a little less unkindly, it could make for a much nicer Oscars night – even if those dominoes it’s lining up in the video are actually bars of soap.

Read next: Playmoss lets you mix SoundCloud, YouTube and Vimeo in one place