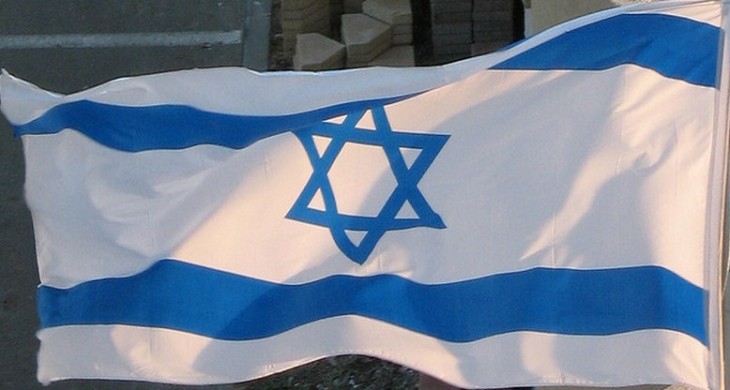 Update: The same Twitter account has just published a tweet that had the TNW staff back on its heels. Here’s the text: “Ahmed Jabari: Eliminated.” And, here’s the accompanying image:

As we noted in discussion, that image could be a cut-rate video game advertisement. Our prior notes on what felt like a somewhat lack of seriousness on behalf of Israel’s social media team now has extra strength.

The IDF has begun a widespread campaign on terror sites & operatives in the #Gaza Strip, chief among them #Hamas & Islamic Jihad targets.

The first target, hit minutes ago, was Ahmed Al-Jabari, head of the #Hamas military wing http://t.co/qD5osfwb

There are 2 main goals of this IDF operation: to protect Israeli civilians and to cripple the terrorist infrastructure in the #Gaza Strip.

Since the beginning of 2012, Palestinian terrorists in the #Gaza Strip have fired 768 rockets into #Israel.

And then results, promises and boasts started rolling in:

All options are on the table. If necessary, the IDF is ready to initiate a ground operation in Gaza.

Some of which felt vaugley childish in their tone, given how deadly serious the topic at hand is:

We recommend that no Hamas operatives, whether low level or senior leaders, show their faces above ground in the days ahead.

Initial reports indicate that the Iron Dome has intercepted a number of rockets above a major Israeli city. #Gaza #PillarOfDefense

Live-tweeting military action may feel slightly tawdry, but in this modern age, a press conference has a certain reach, as do tweets. Both, in unison, can spread a message perhaps farther than either on their own.

That said, according to Fast Company, “[the] Israeli military campaign in the Gaza Strip was announced today via Twitter in lieu of a formal press conference.” Twitter, in this case, is press room, wire service, and billboard for the country’s war.

Perhaps the country will pay to promote the initial declaration of violence, to ensure that it reaches as many individuals as possible.

As a final note, this is not the first announcement of military action on Twitter, exactly. Recall that during the raid on Osama Bin Laden’s compound, one Twitter user who happened to be nearby accidentally live-tweeted that entire affair, not knowing what the cause of the the noise was.

Welcome to the new world.