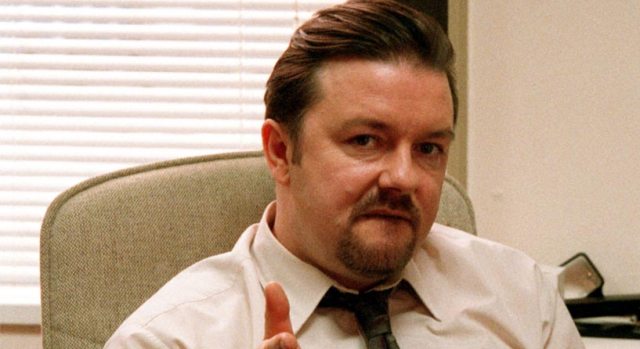 Almost two years after comedy writer and actor Ricky Gervais ditched Twitter because he ‘didn’t see the point’ of it and felt it was ‘undignified’ for adults to use, The Office-creator arrived back on the micro-blogging service with a bang earlier this year, admitting that he may have been wrong about Twitter.

Today, Ricky Gervais is tweeting at a fairly frenetic pace, pushing out over 20 tweets a day to his 1 million followers, a milestone he just reached an hour ago, and many of his tweets are responses to the countless goads he receives on a daily basis. But Ricky is also the latest ‘victim’ of the so-called ‘Twitterjacking’ trend, with an imposter mimicking his account in almost every way.

Using the handle @Rlckygervais, switching the first ‘i’ for a lower-case ‘L’ to make it look authentic, the account started tweeting on December 7. Ricky Gervais was tipped off yesterday about it, and it’s not clear yet whether he’ll make moves to have the account removed:

The fake account has tweeted more than 50 times in the past few days, and it uses the exact same photograph and text as the genuine account, except one glaring typo in the word ‘obviously’:

There have been countless cases over the years of celebrities and corporations being impersonated online. In our Welcome to the world of cybersquatting feature earlier this year, we explored when it is and isn’t okay to ‘squat’ on other people’s online territories, and it seems a lot of it is to do with ‘bad faith’.

In 2004, movie director Spike Lee won a case against a cybersquatter who had procured spikelee.com and was using it to direct users to a pornographic website. The World Intellectual Property Organization (WIPO) ruled that the name had been registered in bad faith and awarded in his favor.

And then there is Jeff Burgar, one of the most notorious cybersquatters ever. Burgar has registered hundreds of famous people’s names, all of which redirected to his own website Celebrity1000.com, including CelineDion.com, MichaelCrichton.com and KevinSpacey.com. He has attempted to defend himself at many WIPO judgements, and one of the most high profile ones was for TomCruise.com, back in 2006.

Burgar argued free speech and the first amendment in his defense, something that is actually legislated for in the Uniform Domain-Name Dispute-Resolution Policy (UDRP). But WIPO concluded that it had to weigh this up against trademark rights and the fact that Bulgar had been taking unfair commercial advantage of a trademark. Basically, on his re-direct website, there was third-party advertising.

Twitterjacking, of course, is a different beast to domain-name squatting. It’s so easy to set up a false Twitter account – it can be done in seconds, with minimal technical knowledge and maximum anonymity. We don’t know exactly how many fake Twitter accounts there are out there, but there have been many examples over the years that pretend to represent an organisation or celebrity. Typically, this isn’t tolerated by Twitter, and it usually intervenes quickly if there’s a danger that people will easily confuse the fake and the genuine accounts.

One of the most notable recent cases was the fake BP Twitter account which popped up following the oil spill in the Gulf of Mexico, issuing droll tweets such as: “Yeah, yeah, @GulfFuture, we messed up. You can donate to www.GulfFuture.org or our XXXmas party. Man, you make one mistake…”

Back in 2009, another fake Ricky Gervais Twitter account surfaced, though it made little attempt to pretend to be the real deal. And at any rate, it stopped tweeting not long after it launched:

Twitter has an impersonation policy in place, which it defines as: “pretending to be another person or entity in order to deceive.” It says:

“Impersonation is a violation of the Twitter Rules and may result in permanent account suspension. Twitter users are allowed to create parody, commentary, or fan accounts. Accounts with the clear intent to confuse or mislead may be permanently suspended.”

It may also surprise you to learn that Twitter has a parody policy in place, which does permit fake accounts as long as they make it clear that they’re not from the real person/organization:

“In order to avoid impersonation, an account’s profile information should make it clear that the creator of the account is not actually the same person or entity as the subject of the parody/commentary.”

People and organizations can report accounts that misuse their trademarks or brand by filing a complaint under Twitter’s Trademark Policy. Twitter processes impersonation reports from the user being impersonated or someone legally authorized to act on behalf of the user.

Will Ricky Gervais push for the account to be removed? Only time will tell.

Read next: Lightbox for Android now gives you an automatically-created photo blog