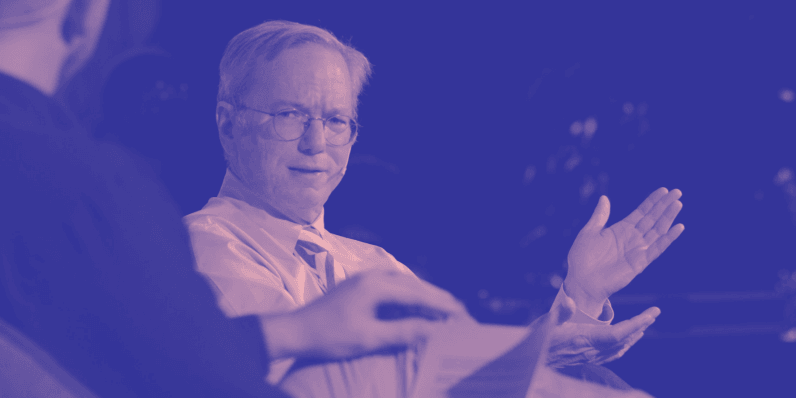 When you’re looking for inspiration on how to grow your startup into a company that could change the world, Eric Schmidt, former CEO of Google and Executive Chairman of Alphabet, seems like a pretty good person to ask. In early October, Schmidt visited TQ, a tech hub in Amsterdam founded by TNW, to impart his words of wisdom. TQ focuses on providing its 50 resident startups with the means to achieve exponential growth through its events, facilities and community. In line with this theme, Schmidt shared his advice on how to grow your startup from 0 to Google – because after all, Google started off just like any other startup.

Schmidt points out that it all starts with having “crazy founders.” The reason for this? “Their goals are much, much bigger than you could possibly imagine,” he explains. “The core lesson I’ve learned is to shoot as high as possible” – so if you don’t quite achieve your extreme goals, you’ve still gone pretty far. Schmidt talks from experience – he worked with Larry Page and Sergey Brin in the very early stages of Google and saw first hand the benefits of aiming for the moon. “You want to have exponentially large goals to solve some major world problem – companies that perform with a global intention and scaleable approach are much more likely to make it,” he advises.

Next on Schmidt’s list of top tips is something he advises all startups that approach him, including the Alphabet startups: “get your products out quickly.” He knows the struggle – “you have to get everything done at once, you have limited time, limited money, and a talent shortage.” Even so, “if you have the right product, it’s reasonably easy to get the money to scale, to build the brand and get the distribution. But the product competition is extraordinarily tough,” Schmidt explains. The reason for this, according to Schmidt, is that the cost of creating a startup in this day and age is so low: “all you basically need is computers, internet connection, and Google!” he points out. Since “it’s all about product now,” Schmidt stresses that getting it out quickly should be the focus for any startup aiming to grow exponentially and beat the competition.

Tell your employees the truth

Let’s say your startup is on its way to reaching the exponentially large goals set by the crazy founders. There are lots of teething problems that come with hyper growth, including ensuring that employees stick to the company’s original values. Schmidt has first-hand experience dealing with this – the debacle about the leaked memo criticizing Google’s diversity policy is fresh on everyone’s minds. So how should leaders deal with these issues, and is there anything entrepreneurs can do now to reduce the risk of these problems surfacing further down the line? Schmidt says startups should deal with growing pains by “embracing fast change, and being ruthlessly honest internally about facts.” If employees are kept up to date with the reality the company is facing, they are less likely to lash out against it than if they’re fed marketing internally from the senior executives which paints an overly optimistic picture.

Schmidt also points out that no matter how hard you try to police your employees internally to make sure the company culture stays pro-diversity, pro-access and pro-transparency, “there are always individuals that either misbehave or disagree with the dogma, the dominant culture.” Even if your startup doesn’t (yet) have the 75,000 employees that Alphabet does, Schmidt reminds us that “you’re always going to have human issues.” It may be a hard lesson to learn, but it’s one that all startups have faced, and it doesn’t seem to have held Google back.

Connect with other crazy founders

Finally, as well as being a crazy founder yourself, Schmidt points out that connecting with others who have similar goals to you can be really beneficial. “There’s been a lot of research conducted on why Silicon Valley is so successful, and the best analysis is that everyone has dinner together,” he explains. “And these are nerds, so dinners are not so exciting,” but nevertheless, this face-to-face informal communication is what sparks more crazy ideas that one day could become revolutionary startups.

Read next: MongoDB 3.6 comes hardened against database ransomware by default