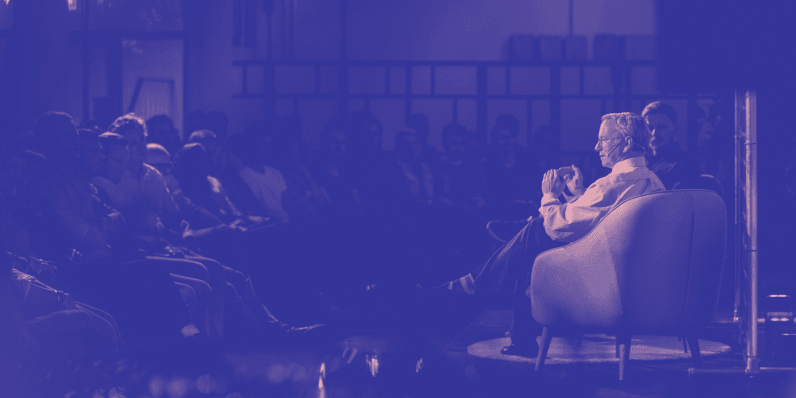 Eric Schmidt, Executive Chairman of Alphabet and former CEO of Google, is considered an authoritative source when it comes to the tech world. So it’s no surprise that when he has something to say, people listen. Last night, Schmidt stopped by TQ, the Amsterdam tech hub founded by TNW, to share his thoughts on entrepreneurship with a roomful of, well, entrepreneurs.

TQ’s mission is to support early-stage startups in achieving exponential growth, working with corporate partners to provide its community with enriching events and state of the art facilities. The hub, which Schmidt describes as feeling “like Silicon Valley all in one room”, is part of the Google for Entrepreneurs international network, and its residents and members turned out in force to hear what Schmidt had to say about the future of work, AI, and getting enough sleep.

Schmidt naturally spends a considerable amount of time travelling the world and meeting entrepreneurs from every corner of the globe. Has he noticed any differences between entrepreneurs in different parts of the world? Schmidt attests that “the people – entrepreneurs as a group – are the same, but they’re more frustrated here in Europe.”

So what are the reasons for this, and what are the biggest challenges that are frustrating tech companies in Europe? When TQ’s Managing Director Robert Gaal asked Schmidt this question, he had a lot to say: “I will tell you that Europe has historically lagged with software. I’m not quite sure why, because the engineers and computer scientists we have in Santa Barbara, many of whom are European, are fantastic – they’re incredible talents. So there’s something in the air or the water or with the regulators or the government or something here [in Europe], pick your argument, that needs to get fixed”.

And that’s not all: Schmidt also considers inadequate higher education, and the ensuing lack of suitable candidates for technical jobs amongst the challenges facing tech companies in Europe. While he pointed out that generally speaking, Europe has better primary and secondary schools than the United States, the latter wins out when it comes to higher education – “not because of the people, but because of the funding.” Since European universities are “dirt poor” compared to their US counterparts, they’re often unable to provide the same level of highly specific education needed for many jobs in the tech industry.

While this might sound like a gloomy outlook, Schmidt is hopeful for the future of Europe’s entrepreneurs and mentioned a number of ways to push back against the issues faced by Europe’s tech companies. Only having a small pool of qualified individuals in certain fields leads to networks emerging, for example, and tech hubs like TQ can help strengthen these networks and increase knowledge-sharing. “We have to get to the point where the default answer for entrepreneurship is ‘yes’ throughout Europe.”

Schmidt also suggested looking eastwards towards China for inspiration, where companies like Alibaba and Tencent rely largely on their domestic market of a billion people. “There’s 800 million people in Europe, lots and lots of smart people, and lots and lots of business opportunities” – it’s just up to Europe’s entrepreneurial minds to take advantage of them.

Read next: This tiny drone solves a huge problem for big warehouses