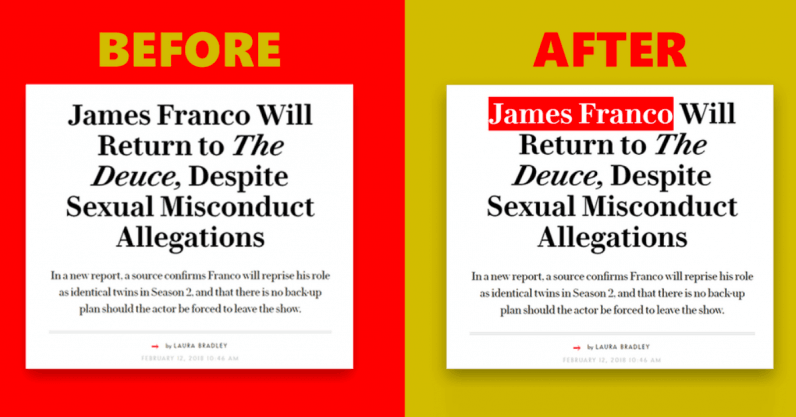 Back in October 2017, Tarana Burke’s #MeToo went viral, empowering women and survivors of sexual harassment and abuse all over the world. The hashtag welcomed a new era of feminist activism, allowing survivors across the globe to share their stories and experiences.

Many other projects seeking to share information regarding abuse have sprouted up since. One such project is “Uncover Harassers,” a Google Chrome plugin created by Sarim Haque. Once installed, the extension automatically finds and highlights the names of celebrities accused of sexual harassment.

The aim of the tool is to prevent people from inadvertently supporting an accused sexual harassers work.

It doesn’t block any information, merely makes internet surfers aware. So far, the plugin highlights the names of 221 alleged harassers who are American, Indian, and Pakistani celebrities. 218 of them are men and three are women, and taken from information published by The New York Times, Livemint, and Parhlo.

If the extension has missed any accused celebrities, users can submit a celebrity harasser through an online form — but you can’t just add anyone, it has to be backed up by an established online publication.

Haque, a product manager based out of Toronto, has created other political projects. The Donald Test is a site which users can use to find out if they sound more like Hillary Clinton or Donald Trump on Twitter, and Block Facebook Chrome Extension which both blocks Facebook and prevents it from tracking you elsewhere.

On Thursday, January 24th, Sarim Haque will be hosting a TNW Answers session where he’ll be taking all your questions. You can ask him anything about Uncover Harassers, his past projects, and how we can use technology for activism. Send in your questions ahead of time!

This TNW Answers session is a part of our series Code Word, an exploration into if — and how — technology can protect individuals against sexual assault and harassment, and how it can help and support survivors. You can read other articles in the series here.