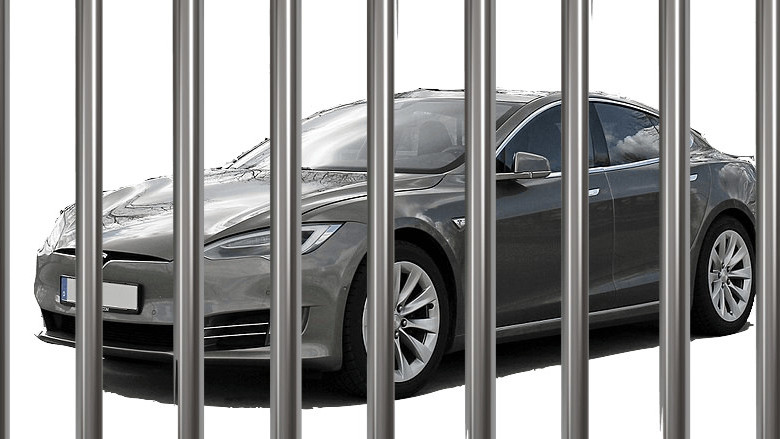 Imagine this: You’re leaving work, walking to your car, and you find an empty parking spot — someone stole your brand new Tesla (or whatever fancy autonomous car you’re driving). When you call the police, they ask your permission for a “takeover,” which you promptly give them. Next thing you know, your car is driving itself to the nearest police station. And here’s the kicker — if the thief is inside he will remain locked inside until police can arrest them.

This futuristic and almost slapstick scenario is closer than we think, says Chief Innovation Officer Hans Schönfeld who works for the Dutch police. Currently, his team has already done several experiments to test the crime-halting possibilities of autonomous cars.

“We wanted to know if we can make them stop or drive them to certain locations,” Schönfeld tells me. “And the result is: yes, we probably can.”

“The police tested several cars; Tesla, Audi, Mercedes, and Toyota,” he continues. “We do this in collaboration with these car companies because this information is valuable to them, too. If we can hack into their cars, others can as well.”

Other car makers already built similar features into their vehicles, but without the driverless aspect. GM equipped 17,000 of its 2009 units with “remote ignition block,” a kill switch that can turn off the engine in case the car is reported stolen.

Before you start referencing dystopian cop movies in your head (“that’s exactly like Upgrade!”), rest assured; we’re still years away from cars driving themselves into custody. Not least because most citizens currently can’t legally drive autonomous cars on public roads.

But it’s not just self-driving cars that are changing how police work. Mobility as a whole is rapidly developing and law enforcement organizations need to keep up.

The first phase, which we’ve been in for some years now, brought intelligent cars — cars with chips that collect data about speed, braking power, and more. Whenever car accidents happen, police can read these chips to better pinpoint the circumstances.

“It helps us differentiate between killing someone by accident — someone speeding just a little — and manslaughter — someone driving way too fast while hitting the victim,” explains Schönfeld.

While Schönfeld expects it will take up to 10 years before self-driving cars are available in the Netherlands, connected cars — or phase two — will go mainstream sooner.

Connected cars have internet access and are often also connected to local wireless networks. This allows them to connect to other devices, both inside and outside, and exchange data.

With public IoT (Internet of Things) becoming increasingly common in the Netherlands, these cars will soon communicate with other smart machines around them, like traffic lights or street lights, and even with each other.

A few months ago, Dutch researchers tested a fleet of seven connected cars, all equipped with cooperative adaptive cruise control (CACC), on a cleared stretch of highway. The cars could adapt their speech to each other and talk to intelligent traffic lights on the road.

“The expected advantage of cruise control is that roads can be used more efficiently,” said Elisabeth Post who worked on the project. “It allows for more cars on the road simultaneously as well as more cars utilizing the same green light.”

Schönfeld envisions a near future where cars will know everything about their surroundings, as well as you, the driver. This constant data collection could save your life someday, he adds.

“Let’s say you’ve been in an accident. It’s night, it’s dark, and you’re lying in a ditch somewhere. Your car will know there’s been an accident because it monitors g-forces. It will be able to call an ambulance, communicate where the accident happened, what the car looks like, and even who was driving by measuring the driver’s weight.”

It’s not all butterflies and rainbows, though. Yes, self-driving-cars will probably increase road safety and benefit the environment, but criminals will be driving them too. Imagine a driverless getaway car after a bank robbery. Now all passengers have their hands free to shoot pursuers.

“Once we’re all driving autonomous cars, I imagine we need systems that detect cars without passengers inside, specifically in crowded, public spaces,” says Schönfeld.

Cop car of the future

Police cars will be getting an update, too. In 2016, car-maker Ford filed a patent for driverless cop cars that can find their own hiding spots, catch lawbreakers and even give out tickets.

Two years prior, Google patented “emergency vehicle detection” technology for its self-driving cars. When the system detects flashlights, it moves itself out of the way so the police car — or ambulance, or fire truck  — can safely pass. Though both technologies aren’t in use yet, these tech companies are clearly anticipating a self-driving future.

“This is something we need to start thinking about,” says Schönfeld. “Should we start planning for connected and self-driving police cars? When do we need them?”

Once self-driving cars do become legal and mainstream, traffic violations will drastically decrease. “That means a large portion of the force, our traffic officers, will probably get new duties,” he adds.

After all, autonomous cars will comply with speed limits, respect red traffic lights, and never double-park. Does this mean we get to blame our driverless cars whenever we do get a ticket? “No, you will still be accountable,” he concludes. “Unless it’s a proven technical defect. Then your car manufacturer will have to pay up.”