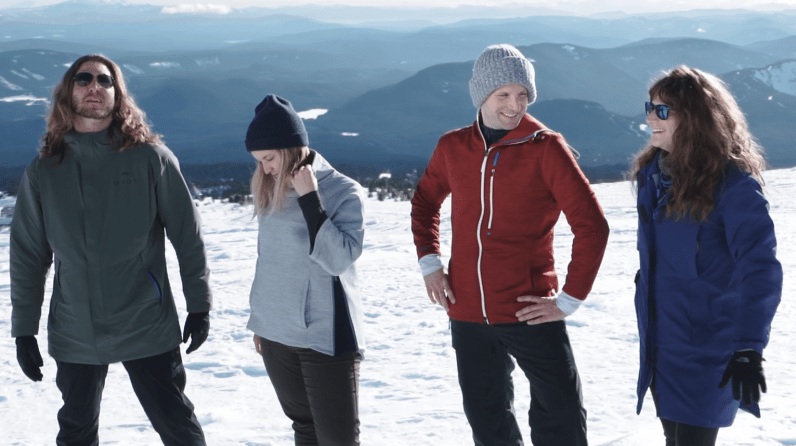 One of my favorite pieces of wearable technology I’ve tested here at TNW was an actual article of clothing: the Oros Orion Parka. Using an Aerogel-based insulator called Solarcore – Aerogel is the same material used by NASA to insulate equipment such as the Mars Rover – the coat was one of the warmest coats I’ve worn while maintaining minimal bulk.

Today, Oros is launching a Kickstarter campaign updating the Orion Parka with a new and improved look, while also introducing two new designs that will arrive next fall: the Astra pullover and Atmos hoodie.

As a recap, aerogel is one of the lightest man-made materials and greatest insulators in the world. If you’ve never held a piece of aerogel, it’s a surreal experience: it’s rigid and looks like frosted glass, but feels almost completely weightless.

However, it’s also extremely brittle and disintegrates in water, so Oros’ research efforts were spent finding a way to use aerogel as an insulating material while maintaining the flexibility, durability, and water-resistance needed for actual clothing. The resulting composite looks quite different from aerogel but purports to carry over much of its insulating properties and outperform existing insulating materials.

The new Orion Parka appears to largely be an aesthetic refresh of the previous version but has a few new features in tow such as a sternum strap for wearing the jacket open and an airlock at the waste to keep the warmth in. It’s the company’s most heavy-duty jacket for the harshest conditions.

Perhaps more interesting are the Astra Pullover and Atmos Jacket, which are theoretically thin and light enough for everyday use while providing enough warmth for cooler temperatures.

One of the reasons I appreciated the original Orion was its ability to withstand the coldest New York Winters with minimal bulk and little need for layering underneath; I’d often run errands with just a t-shirt under the jacket on days with freezing temperatures.

If the pullover and hoodie can provide a significant amount of insulation without the bulk of heavier jackets, they could be compelling for people who tend to run cold like me.

The products are launching on Kickstarter and at the time of writing, the campaign is already funded. Oros expects the products to ship in October for early backers and November for the rest. They will cost you a pretty penny at $200, for the hoodie and pullover and $360 for the Parka, but in my experience, the Parka at least has held up to extensive use.

While we are normally wary of crowdfunding campaigns for products we’ve yet to try, Oros began its life on crowdfunding and is a pretty established brand by now, so we feel confident sharing their campaign. Still, as always, back at your own risk.

Read next: Leak: Pixel 4a hands-on video leaves little for Google to announce