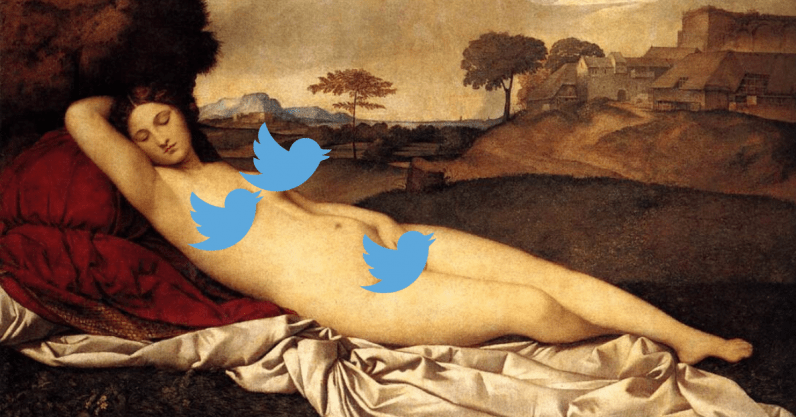 Over the past year, social networking platforms Facebook and Instagram have made it almost impossible for NSFW artists to exist on the platforms in their efforts to ‘clean up’ the sites. The measures employed have ranged from banning any discussion around “sexual preference,” “sexual roles,” “breasts,” and “buttocks” to the tech giant’s latest stunt in restricting solicitation that involves “sexual emoji or emoji strings.”

The trend of deteriorating conditions for NSFW artists to make a living online first started last year when Tumblr announced that it would block anything it considered to be adult-rated visual content. Now, Twitter, a platform that tolerates sexual expression, has joined the censorship-ranks by changing its guidelines around its “sensitive media policy.”

Reading through TOS with specific insights included below. To clarify, adult content is allowed if marked as “sensitive.” But accounts dedicated to posting “sensitive media” will be banned. Going to take a stab that means SWers will lose their accountshttps://t.co/ZosTSr9zOz pic.twitter.com/XofVKsvUP4

Twitter considers “violent sexual conduct” to be any media that portrays violent actions alongside sexual interactions, “whether real or simulated” such as simulated lack of consent and sexualized violence. Adding to this, Twitter can remove any material “that depicts violent sexual conduct or gratuitous gore anywhere” and can also permanently ban accounts that are “dedicated to posting this type of content.”

While blocking “violent sexual conduct” seems like an easy move to clean up its platform and prevent offensive material from circulating on Twitter, multiple NSFW artists have voiced their concerns over this policy update signaling a complete NSFW-content ban in the coming year.

“We prohibit violent sexual conduct to prevent the normalization of sexual assault and non-consensual violence associated with sexual acts. We prohibit gratuitous gore content because research has shown that repeated exposure to violent content online may negatively impact an individual’s wellbeing,” Twitter’s new guideline reads. “For these reasons, you can’t share images or videos that depict violent sexual conduct or gratuitous gore on Twitter.”

Another form of policing that platforms including Facebook and Instagram have been using is “shadow banning,” the process of blocking or partially blocking a user or their content from an online community so it won’t appear in explore pages or the search bar.

As outlined in Twitter’s 2020 user guidelines, the company reserves the right to “limit distribution or visibility of any Content on the service.” This is a new addition as the company didn’t have the rights to do so in its company guidelines back in March 2018, as reported by XBIZ.

Twitter’s updated, and vague, guidelines, act as yet another hurdle for sex workers and NSFW artists trying to make a living. While it’s unclear if Twitter has plans to place a complete-ban on sexual content on its platform, its first steps in censoring NSFW accounts isn’t a hopeful sign.

Read next: Dopamine fasting: an expert reviews the latest craze in Silicon Valley