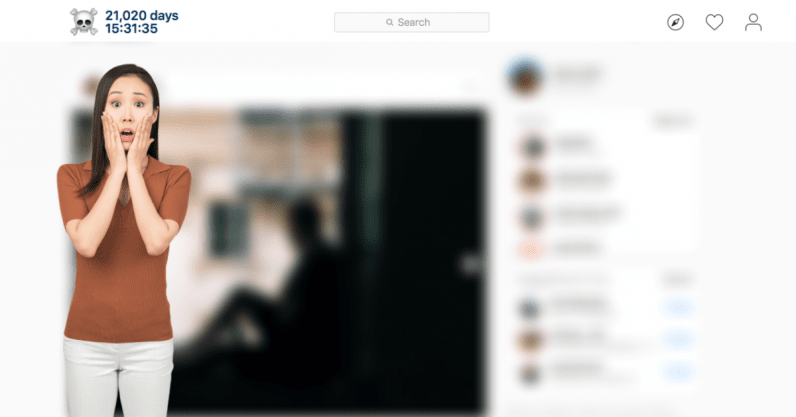 Despite fearing death, humans have always been weirdly obsessed with anticipating their final day on earth. Now in the digital age, this morbid fascination with predicting death has taken form in digital death clocks. Death countdown tools are often used as a joke, but some financial institutions, health organizations, and insurers are using its data as a life expectancy calculator.

Now, there’s a death clock for the amount of time you’re wasting on social media. Last year, the average daily usage of social media worldwide was 2 hours 22 minutes, according to Statista. And that’s just a just a drop in the ocean compared to teens who spend an average of nine hours a day online.

This is where “Social Media Death Clock” comes in. Created by software engineer Anthony Morris, this Chrome extension reminds users of their mortality as they waste time on Facebook, Twitter, Instagram, and Youtube. The extension aims to remind you of your inevitable death, whenever that may be, and encourages people to spend less time online, and more time in the real world.

To find out when you’re most likely going to die, download the extension and add in your age. According to its prediction, I have 21,020 days left on earth and I’ve never felt stress like this.

The extension helps users practice memento mori, the art of reflecting on our mortality, especially as a means of considering the vanity of life. According to Morris’ GitHub page, memento mori has been an important part of ascetic disciplines as a means of perfecting the character by cultivating detachment and other virtues, and by turning the attention towards the immortality of the soul and afterlife.

Being reminded of our impending death allows us to reflect on the things we spend the most time on, and in most people’s cases, that’s social media.

Find out when you’re going to die by downloading the Chrome extension here.

Read next: US tip-off leads to arrest after man buys child abuse imagery with cryptocurrency in Australia