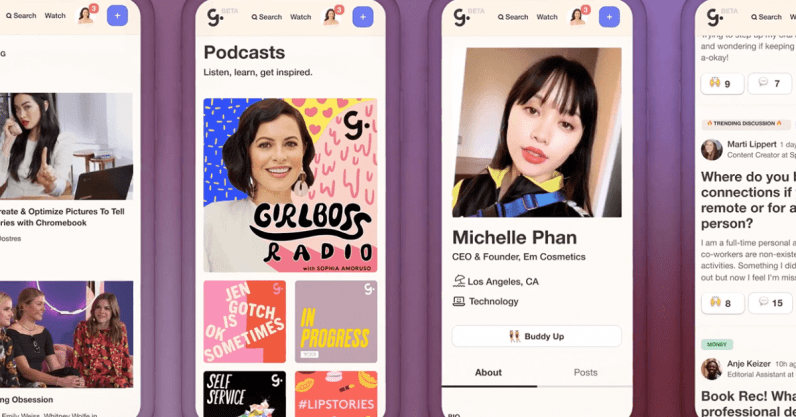 Not only is LinkedIn painfully boring, but it often feels like a sausage party filled with senior level white men. And research backs this up: in 2017, a study by LinkedIn revealed how sexist norms infiltrate the way men and women present themselves on LinkedIn. By analyzing over 141 million profiles in the US, it found women promote themselves and their successes a lot less than men do.

In a bid to give women a better professional platform, Girlboss CEO and Founder Sophia Amoruso launched the company’s first-ever, free social networking site — professional networking 2.0, dubbed as a “LinkedIn for women.”

On Girlboss’ new professional site, which is available in the US, women entrepreneurs, creatives, and freelancers can connect directly with like-minded peers and notable industry leaders. Its members already include the likes of Jen Rubio, Payal Kadakia, and Bozoma St. John, who are participating in a Q&A session as part of the platform’s launch.

Amoruso built this platform after finding out just 23 percent of millennials are on LinkedIn, reinforcing Girlboss’ belief that the traditional resume is antiquated and doesn’t serve today’s generation. “We are so much more than our experience, trading on our personalities, ideas, and creativity in ways we didn’t years ago,” Girlboss stated in its press release.

Unlike LinkedIn, Girlboss sees the member profiles as an updated, more comprehensive take on the standard resume. Users can share their work experience alongside a snappy fill-in-the-blank bio, their horoscope reading, and their favorite “Girlboss moment.”

Although there’s no denying the odds are against women when it comes to VC funding, discrimination in the workplace, and pay parity, we have to question whether women-oriented projects like Girlboss’ professional networking site are helpful or hurtful in achieving gender equality.

Another example of this is the multitude of women-oriented events that have launched in order to fight gender parity in tech. Events like these seek to create a safe space, free from discrimination and with a focus on women-specific challenges. But some have raised concerns these events create a bigger gap between the genders, and exclude men from the conversation.

Girlboss’ site claims it’s “open to everyone,” which presumably includes men. But like in conversations regarding feminism, it’s important to point out that most women-focused projects, events, and platforms aren’t really about excluding men — they merely put women in the spotlight, which rarely happens naturally in the workplace, specifically in STEM fields, or on LinkedIn.

With many similar women-focused networks recently popping up — including Bumble Biz, the dating app’s professional platform that puts women first, and The Wing, a community and co-working space designed for women — it’s encouraging to see women’s professional advancement finally being prioritized.

Girlboss also has plans to launch an app for its professional networking site soon. You can check out their platform here.