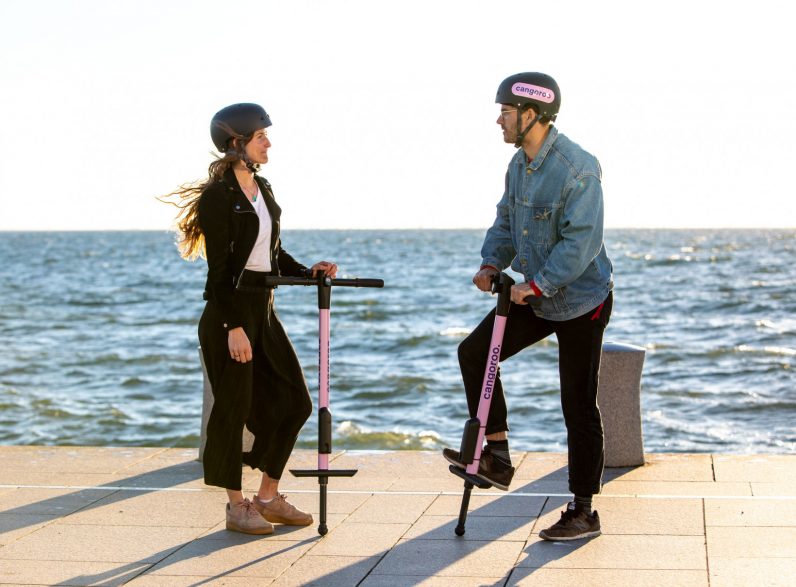 I just got off the phone with Adam Mikkelsen, founder and CEO of shared mobility startup Cangoroo, who insists that his company is totally real.

Wait, I’m getting ahead of myself. Let’s back up.

Cangoroo is a pogo stick-sharing startup that hails from Stockholm, Sweden. It operates on the same basis as Bird and Lime, with users paying based on their usage. The main difference is, well… pogo sticks.

That alone raises eyebrows. And then there’s the fact that the company is owned by ODD Company, a branding and communications agency that has produced viral stunts for companies like Carlsberg, German travel agency Tui, and the Movember Foundation. Could this be yet another headline-grabbing hoax?

Mikkelsen insists it isn’t. “It is a real venture,” he protested.

During our call, Mikkelsen explained that part of the idea was to create a shared mobility product that didn’t feel generic, which is a complaint he has with the current cohort of electric scooter companies, like Bird and Lime. This is something he blames on their desire to be first to market.

”With the pogo stick, the way we’ve branded it is as a product you can actually use for last-mile transportation,” Mikkelsen said.

However, that’s not the only point of the product, according to Mikkelsen. He explained that he envisions the sticks being used by millennials as a “shared fitness product” and “a fun way to get some fitness in your daily life.” He also hopes that nostalgia will drive the oddball company’s growth.

“A lot of people in Sweden had pogo sticks as children, so we see them using them as adults,” he said.

When pressed, he said the company plans to acquire roughly 100 pogo sticks. That’s a modest number, especially compared to the vast fleets operated by Bird and Lime. Moreover, the company wants to experiment with small scale distribution at first, in order to test the waters.

“We’re going to launch in Stockholm and Malmo with 100 [pogo sticks]. We don’t want to just put them out without having the marketing prepared. In the first place, we’ll just release 10, 15, 20,” he told me.

Cangoroo also envisions a US launch in the near future. It wants to distribute pogo sticks in San Francisco – specifically in the picturesque Golden Gate Park, which is a haven for joggers and other fitness enthusiasts.

Mikkelsen says that Cangoroo’s app, which will purportedly be available for Android and iOS, is currently in development, and awaits approval from Google and Apple. The company‘s website contains mock-up screenshots that look similar in design to other shared transportation startups.

And interestingly, the company has ambitions beyond pogo sticks. It wants to use the 1970’s fad toy to bounce (sorry) into other sectors of the mobility industry.

“We aim to launch a second product, kickbikes.” Mikkelsen told me. “Shared kickbikes will have a way better life[span] than electric ones. We found that there’s a huge demand for urban mobility and are trying to build a brand in the category — one that appeals to the millennial generation.”

Real or fake, you decide

I’ll be honest, I’m still not entirely convinced this isn’t an elaborate hoax. My spidey sense tingles with suspicion. The website looks scarcely more than an MVP. Furthermore, Cangoroo comes from a company with a proud history of producing branded stunts for paying customers.

On the flip side, Mikkelsen seemed earnest when on the phone. It’s difficult to prove a negative, and at this point, I don’t have any evidence to definitively conclude that Cangoroo is a stunt.

This all feeds into my next point. Assuming we’re not being punked, Cangoroo will have to work hard to convince others of its authenticity. It recently had to update its launch press release with the statement “Cangoroo is indeed a real start-up,” accompanied with a paragraph-long explanation of the company’s aims and strategy. I’ve copied it below:

With a lot of initial questions along the line of “is this for real?”, we feel the need to underline that Cangoroo is 100% real. Our choice of shared pogo sticks as our first product is a planned out strategy in order to stand out in today’s media landscape and build an engaging brand in the generic “last mile transportation” category. That the team behind Cangoroo is also running a communications agency, we see as an important competitive benefit for the future of the business rather than something we try to hide from stakeholders. Naturally, we’ll soon be announcing complementary, more daily commute-focused, products to our fleet (more similar to the largely popular e-scooters and with a genuine focus on sustainability and health).

The funny thing is, pogo sharing is exactly the type of bonkers moonshot idea I can imagine a venture capitalist actually funding (and, incidentally, Cangoroo is actively soliciting investment right now). I mean, is it weirder than Yo, for example, which was a chat app that only let you send messages consisting of the word “yo,” and raised $1.5 million?

What about Bodega (now Stockwell), a notoriously tone-deaf company that made glorified vending machines, raising $2.5 million in the process?

The sharing economy is an ever-present fact of 21st century life. Given it extends to cars, houses, and even clothes, can you think of a reason why it shouldn’t include pogo sticks?

Read next: How to adjust the brightness of your iPhone flashlight