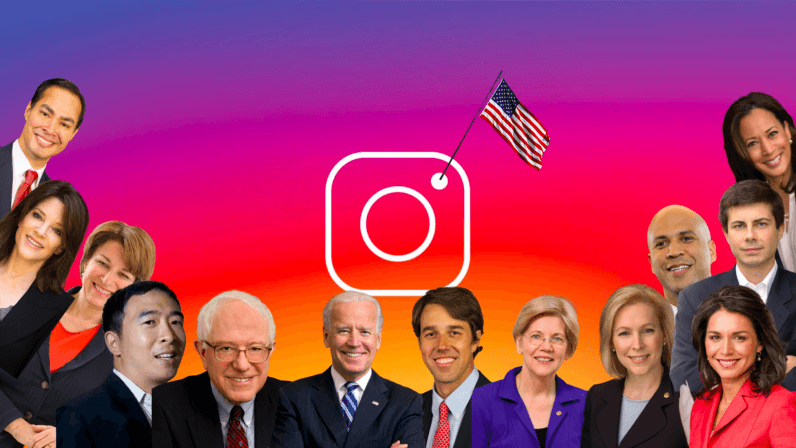 In a crowded pool of candidates, one stacked from top to bottom with political icons and young upstarts hoping to unseat them, it’s time to put up or shut up.

The Presidential Election is still more than 18 months away, but we find ourselves quickly encroaching on primary and caucus season. The first, in Iowa, is scheduled for Monday, February 3. A month later there’s Super Tuesday, a single day smackdown with 12 primaries in 24 hours that could make or break a candidate’s chances at taking on President Donald Trump (the presumptive Republican nominee) for a bid at the White House.

And while we could rely on sound bites from rallies, or quick-fire debate with an MSNBC panel, we felt it was our duty to the American people, nay the world, to do a little sleuthing of our own, finding out what we could about each candidate based solely on how they use Instagram.

Sen. Kamala Harris boasts an enviable 1.6 million followers, followed by Sen. Elizabeth Warren (1.3 million) and former Vice President, Joe Biden (1.2 million), a man who hasn’t posted on Instagram in three months. None can compare to the social media prowess of a 77-year-old socialist from Vermont with great hair and an even better social team. Sen. Bernie Sanders is leading the pack with some 3.2 million followers, more than twice that of number two, Harris.

Sanders’ team uses Instagram as a political weapon, serving up debunks to mistruths by the current White House administration and pointing out inequality in all corners of the country, and sometimes the world.

His feed offers an impressive mix of content types, from tweets (his own, mostly) and video, to charts and candids from the campaign trail. Better yet, it won’t overwhelm you. You can expect one to three posts per day, on average, each with thousands of likes and shares.

… but maybe not for long.

For the most part, the top seven candidates (the four above, plus Beto O’Rourke, Sen. Cory Booker, and Marianne Williamson) have remained a near-constant in terms of total followers.

But the real action isn’t on the top of the list, it’s at the bottom. Since January, Pete Buttigieg, the mayor of South Bend, Indiana, has been on a tear. In just three months, “Mayor Pete” has skyrocketed from literally off the chart into the number seven spot.

And he’s not alone. Andrew Yang, the technologist of the group running on a platform of “human-centered capitalism,” whatever that means, has also seen an impressive rise. Though, for Yang, his momentum seems to have stalled around the number 10 spot and he’s mainly holding steady at this point.

Buttigieg though, a man who seemingly came from nowhere, is one worth watching.

Sanders may be popular, but he’s not particularly compelling

Though Sanders is undoubtedly popular in terms of follower count, his engagement numbers are, well, not great. While the median would seem to sit somewhere around four to six percent engagement — a figure derived from the percentage of your total following that likes, shares, or comments on social postings — Sanders is near the back of the pack with just an average of 2.81 percent.

While Sanders seems to have some work to do here, he’s not exactly the worst; that honor belongs to Marianne Williamson and her 0.87 percent engagement rate. Sanders, in fact, isn’t even the worst among the most popular Democratic candidates. Harris (1.83 percent) and Warren (1.02 percent) aren’t exactly lighting the Instagram world on fire, either.

Now that we’ve talked about the worst engagement rates, let’s take a second to talk about the best. As I said above, the median is somewhere near four to six percent — a Barack Obama level of engagement, if you will. Care to guess what Mayor Pete’s engagement percentage is?

If you said 17.37 percent, you’d be absolutely correct — and you should maybe buy a lottery ticket, just in case.

Buttigieg is a force to be reckoned with, besting not only the current pool of candidates, and by a lot — number two is Sen. Amy Klobuchar, at 6.25 percent — but even topping the efforts of another social media superstar in the run-up to the 2018 Midterm Elections.

Alexandria Occasio-Cortez was both praised and chastised for her use of social media in 2018, but ultimately it helped to make her a recognizable face in the “new” left — winning her a seat in the House of Representatives in the process. And while AOC’s campaign undoubtedly hinged on her decidedly millennial abilities to harness social media, even she wasn’t as good as Buttigieg — though she was close (15.43 percent to 17.37 percent).

President Trump, if you were wondering, doesn’t even compare. Though he has the edge, by a lot, in follower count, his engagement numbers are a rather paltry 1.6 percent.

There’s a truism in politics that the needs of the masses are served by a handful of old white men. That’s changing, of course; the 2018 midterms injected a much-needed dose of new blood into congress, affording a record 117 women their rightful seat at the proverbial table — including two Muslims, a first.

We took a magnifying glass to each candidate’s follower counts, trying to find candidates with the highest percentage of female followers. It was a close one, with Marianne Williamson narrowly edging out Joe Biden for the crown.

Sanders, interestingly, has a nearly 50/50 split of male and female followers, while candidates Rep. Tulsi Gabbard and Yang clearly have more work to do if they want to reach women. Both audiences are in excess of 70 percent male.

But what about minorities?

This category offers few surprises. Latinos, like Julian Castro, tend to attract a large share of the latino interest. The black vote tends to veer toward Booker and Harris. Asians, unsurprisingly, like Yang.

Caucasians, well, they’re all over the place. If these numbers tell us anything, it’s that popular white candidates need to make greater strides towards winning the hearts and minds of minorities.

Candidates like Buttigieg and Klobuchar clearly have some work to do in terms of attracting a more diverse group of followers. Both lead the pack in terms of having the whitest audience.

Ask anyone with a racist relative and they’ll tell you that age certainly plays a part. While unfortunate, the United States is teaming with individuals who grew up in a different time, and aren’t so quick to adjust. Many lived through Jim Crow and race riots. Others fondly remember periods where women’s rights were but an afterthought, divorce was a taboo topic, and being LGBT was a condition only understood by sexual deviants.

Much like your racist relative, age plays a part in voting behavior too. The rule of thumb is that younger voters tend to skew more liberal and progressive while older voters tend to be more moderate in their worldview.

The theory would seem to hold true on Instagram as well, with arguably the two most moderate Democratic candidates — Booker and Klobuchar — attracting an older following. Both, along with Williams, have the oldest follower bases (on Instagram, anyway) of any left-wing candidate.

Uber-progressives like O’Rourke, Yang, and Sanders, on the other hand, have higher percentages of younger voters — those younger than 44, in this case.

We did see a significant variation from the mean in two candidates: Yang, and O’Rourke, both of whom have significantly more “suspicious” followers than any other candidate. We use suspicious, in this case, because it’s almost impossible to determine if they’re actually fake without a manual review — and we’re not sorting through millions of followers to sort the fakes. Sorry.

Low-quality followers don’t stop at those that are fake or suspicious. All candidates have a significant percentage of accounts that we’d classify as “mass followers,” those that tend to follow many accounts in hopes they’ll gain a following themselves. In that category, we see Gabbard and Marianne Williamson run away from the rest of the pack.

Last, but not least, in terms of follower quality, what list would be complete without mentioning the number of so-called influencers following each account? Marianne Williamson, for some reason, is head-and-shoulders above the rest of the group in this one. It’s not even close. Being Oprah’s spiritual advisor (we’re not making this up), might offer a clue there.

Okay, we get it, this election is for those that reside in the United States. But we started to wonder, who’s the most popular candidate overseas? So, to scratch our collective curious itch, we found out.

It’s Sanders. Sanders has amassed a lot of attention after his failed presidential bid in 2016. But what’s surprising is that he’s well ahead of Biden (1.1 million international followers to 300k), the actual Vice President of the United States from 2008-2016. As name recognition goes, I guess I found it a little shocking that a Senator who failed to win the Democratic nomination in 2016 is more recognizable than the person who held the second highest office in the United States for eight years.

But, what do I know?

Wrapping up, we thought it’d be fun to shed some light on the interests of those following the top candidates. This isn’t an all-inclusive list, but here are a few of the other categories the candidates’ followers are interested in.

– 56 percent of Buttgieg’s following loves Art & Design.
– 47 percent of Harris’s following is interested in Beauty & Fashion.
– Biden and Booker share the top spot for the biggest percentage of those interested in Children & Family.
– Yang leads the pack in multiple interests, such as Music (51 percent of his followers), Entertainment (45 percent), and Cars & Motorbikes (32 percent).
– Warren’s followers like Clothes, Shoes, Handbags & Accessories (34 percent).
– Biden’s fans really dig pets (34 percent)
– Gabbard has the most sports fans (40 percent)
– Klobuchar’s fans are really into topics related to their Home & Garden (38 percent)

We obviously didn’t mention all of the Democratic candidates. Instead, we decided to focus on those with at least 25,000 followers. Data from this article was gathered using HypeAuditor and CrowdTangle. Visualizations were made using Flourish.

Read next: Analogue’s $190 Mega Sg is a treat for Sega fans who saved their cartridges