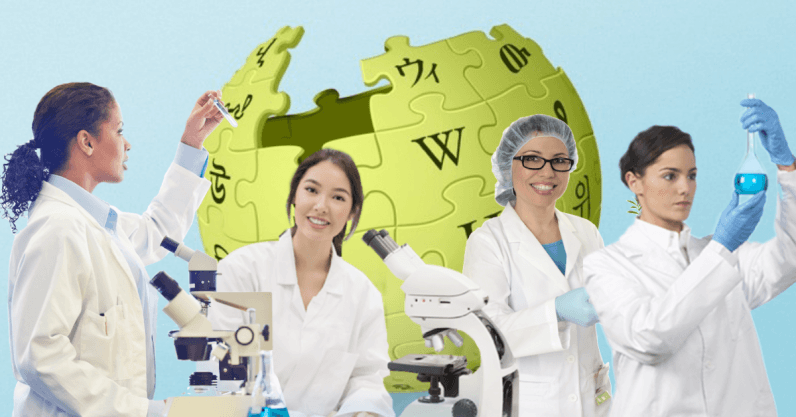 Dr. Jess Wade is hosting TNW Answers on Tuesday, July 30. She’ll be taking all your questions on diversity in science and activism — send them in now!

It’s not surprising how grossly underrepresented women are in the fields of science, technology, engineering, and maths (STEM). Hell, in the UK, half of state schools submitted no girls to study A-Level physics. Although the stats are disheartening, it doesn’t reflect women‘s ability, instead it shines an unforgiving light on the realities of the society we live in.

Just 17 percent of the English-language biographies on Wikipedia are about women, and women scientists in particular  are badly represented. But physicist Jessica Wade is hoping to change this. An advocate for diversity in science, Wade balances her work as an award-winning physicist at Imperial College London with her role as a ‘Wikipedian’ — creating and uploading the biographies of scientists who are women, people of color, and part of the LGBTQI+ community every day.

After reading Angela Saini’s book, Inferior: The True Power of Women and the Science That Shows It — a powerful look at the science behind the stereotypes that have excluded women from contributing to society — Wade felt empowered to spark change.

“Reading Inferior had made me angry enough. But then to learn that Wikipedia was so bias, I had never appreciated that before. I’d always assumed the content on its platform was consistently good; I was surprised to find out just how wrong I was.”

Why do I care so much about getting a copy of #Inferior into all schools? Because I don’t want to just tell girls they can do anything. I want them to read it, be empowered, and join our fight for equality. #thisgirlcan https://t.co/JB3Uc6JuU8 pic.twitter.com/23F9UJOp1Q

Earlier last year, Wade started her Wikipedia project to increase the visibility of women scientists on the site by adding small amounts of information to its platform. Since Wade began, she’s created a page each day.

“I didn’t really expect anyone to care about what I was doing, which I guess is the interesting part of the whole conversation. I assumed people would think, ‘It’s fine. Just let her have some fun,’” says Wade. “But actually, the positive impact it has, especially on people talking about stereotypes, is impactful.”

Throughout Wade’s career, improving diversity within science has always been a priority: “I guess my issue all along with outreach and engagement [to women] is that it endlessly comes back to the discussion around role models and how ‘we need more role models’ and how ‘there aren’t enough role models.’”

“But my argument is that there are so many role models, so many brilliant women scientists and people of color. We just don’t celebrate and recognize them enough. We need to talk more about the ones we have, because we’re at risk of losing them and all the work they’ve done.”

STEM’s diversity issues are influenced by long-believed societal stereotyping on gender. “Our society tells children they’re good at different things. Whether it’s pink and blue toys, whatever clothing children wear, and the books they read,” Wade explained. “Girls are told from an incredibly young age that science is for boys.”

When asked what Wade hopes to achieve through her work on Wikipedia, she said: “If a young person is sitting at home browsing the internet, Googling something they find interesting like climate change or the shape of a pyramid. If they go to Wikipedia and start reading the names of scientists, there will be women and people of color there, and people who look just like them who have had this massive impact on scientific discoveries.”

Wade’s work to improve science‘s diversity issue shows that women have always been there, they’ve just not been celebrated. Until now.

TNW Conference 2019 is coming! This year The Next Women summit will shine a spotlight on women in technology and innovation. Read more about what to expect here.

Read next: Hacker selling 26M stolen user records in exchange for $5,000 worth of Bitcoin