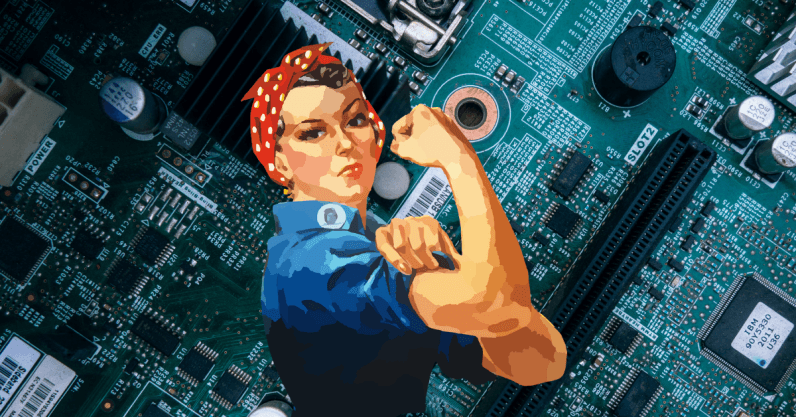 You’ve heard it a million times before — in the science, technology, engineering, and math industries, women are still grossly underrepresented.

Currently, women are only nine percent of IT leaders around the world. The figure has barely changed in the past few years despite one third of organizations claiming to have implemented diversity initiatives.

Women make up only 24 percent of computer science jobs — a decline from 37 percent in 1995 — and make up just 11 percent of executive positions in Silicon Valley.

While this problem isn’t being fixed fast enough, the following women in STEM are stepping up by tackling the gender imbalance and working to redefine the stereotypical tech industry.

Georgina Ustik’s pick: I first found out about Sharmadean Reid through WAH Nails, a ridiculously cool nail salon she began years ago.

WAH was one of the first beauty businesses to utilize Tumblr to showcase their work, instead of using typical brick-and-mortar posters and signage. By following Reid’s career, I learned more about the challenges the beauty industry faces, tech-wise.

After all, technological innovations typically follows the interests of those who make it — not many straight white dudes have a passion for making beauticians’ work easier.

Since then Reid has earned an MBE for services to the beauty industry, began Future Girls Corp, an organization that supports future female CEOs, and has launched beautystack, a platform connecting independent beauty professionals to customers. Her diverse career has one string tying it all together — building communities where women can learn and grow to be independent.

I also had the opportunity to interview Reid in London this year, after which she hosted a TNW Answers session. She’s intimidatingly smart, sharply entrepreneurially and tech-minded, and deeply aware of how the beauty industry has not been given the attention it deserves from the tech industry.

Matthew Hughes‘ pick: The debate surrounding female representation in STEM (or the lack thereof) is often centered around front-line workers: programmers, scientists, sysadmins, and the like. But there’s another part of this crucial discussion that often gets sidelined.

I’m talking about tech entrepreneurship. Women-led startups struggle to get access to the venture capital that’s necessary to fuel exponential growth, with 90 percent of VC funding in Europe going to male-run companies.

Allyson Kapin tries to address this problem. She is a vocal and powerful advocate for women-led startups, and a mentor to female entrepreneurs. She partners with allies and runs events across the world that offer access to capital, while simultaneous raising the profiles of the companies that take part.

Anouk Vleugels‘ pick: Kara Swisher, co-founder of Recode, didn’t suddenly pop up in 2018 — she’s been a driving force in tech and business journalism for years. Silicon Valley’s finest both love and fear her, as she’s known for her straight up, sometimes ruthless, style of reporting.

So far the promotional blurb. Yes, Kara Swisher is a very talented journalist and entrepreneur, but after listening to an interview with her and Ezra Klein, I realized she’s so much more than that. I don’t think I’ve ever heard a woman applaud herself and her work in such a wonderfully unapologetic manner.

The conversation, which takes 135 minutes, touches upon her early career, her time at Recode, and she offers tips for interviewing and reporting. She makes references to be very good at her job at least ten times, and not once did I think: God, she’s arrogant. Quite the opposite, actually, she’s funny, charming, and charismatic.

At some point, Ezra Klein asks her if “her personality has always been so….”, “Obnoxious?” she adds. “I wanted to say ‘confident,’” he answers. “Oh, I would call it obnoxious. And yes,” she says.

TLDR: Women everywhere, both in STEM and other industries, please take a page from the Kara Swisher playbook. You’ll thank yourself later.

Már Másson Maack’s pick: My fascination with EU’s Commissioner for Competition, Margrethe Vestager, is getting a bit embarrassing — but her name simply has to be included when talking about influential women in tech.

During her time in office, Vestager hasn’t shied away from using all the tools at her disposal to make sure tech giants play by the rules, and that technology serves people – not the other way round.

She’s been the driving force behind EU’s probes into the world’s biggest tech companies, such as Apple, Amazon, and Google — with the last one resulting in a record-breaking $5 billion fine for breaking competition laws.

For tech to reach its full potential, we’ll need to trust it — which is a tall order after a chaotic year filled with revelations of big tech’s sinister behavior (remember Cambridge Analytica?). One way for tech companies to regain people’s trust is for us to know that they’ll be held accountable when they break the law — no matter how big they are. This is exactly what Vestager brings to tech.

Cara Curtis‘ pick: While many prominent celebrities and figures helped #MeToo go viral, the movement was originally created a decade ago.

The founder of the #MeToo movement and Senior Director of Girls for Gender Equity, has been a major influence in the feminist movement which has led to multiple high-profile men losing their jobs after years of sexual harassment, assault, and/or misconduct — making male dominated fields more accessible to women.

Asides from Hollywood, many sexual assault survivors have been sharing their #MeToo experiences on social media for over a year which has sparked a change in the workplace — and the groundwork for a movement started with one woman, Tarana Burke.

Neysa Tavianto’s pick: When listing out amazing women in STEM, we shouldn’t limit ourselves to adults, as 10-year-old Samaira Mehta has already accomplished great things in the field, despite her young age.

She’s a coding prodigy and founder and CEO of CoderBunnyz — a company that combines concepts of ‘fun’ and ‘coding’ to get kids interested in STEM.

She first founded the company when she was just eight-years-old when the company’s first board game was released. This earned her second place at the 2016 ‘Think Tank Learning Pitchfest,’ with a $2,500 award to go with it.

Now she’s working on a second board game with her younger brother, Aadit Mehta, called CoderMindz — which will teach children about artificial intelligence through coding.

To add to her accomplishments, Mehta has also held numerous workshops in Silicon Valley, attracting, specifically attracting the eyes of tech giants like Google and Microsoft. When offered a position to work at Google straight after university, Samaira declined to become an entrepreneur herself. So, maybe her generation will limit the pre-existing gender bias in STEM and bring in more diverse pioneers for the future.

Callum Booth’s pick: One of my favorite thought experiments is considering what career path famous people would’ve taken if they were born in a specific area.

You know, like the Brontë sisters world-building and story-creation skills making them perfect for movies. Or how Tracey Emin’s autobiographical art would flourish on YouTube. Or, as Kathryn Parsons stated, Leonardo da Vinci being attracted to the world of technology.

Kathryn Parsons is a co-founder and co-CEO of Decoded, a company that teaches people to code. I first came across Parsons when she said “[she is] certain that if Leonardo da Vinci were alive today he would be learning to code.”

Not only was that right down my alley, but she’s completely right.

Decoded now operates in 85 cities across the globe and reaches hundreds upon hundreds of thousands of people. She actually spoke about the importance of getting the world to code at 2017’s TNW Conference.

Parsons hasn’t just been creating the foundation for a code-driven world though. Not at all. She’s been a driving force across a number of campaigns that aim to bring more women into business and technology.

Rising up the ranks and pulling up the ladder isn’t Parsons’ style. She not only wants to teach the world to code, but also wants to make that world as balanced and equal as possible. No matter what the future holds, if Parsons was born later, I can guarantee she’d still be out there trying to help people.

Abhimanyu Ghoshal’s pick: Few people have singularly impacted an industry as deeply as Fei-Fei Li. The Chinese computer scientist is known for her invention of ImageNet – a database that helps computers recognize objects in images – and for setting the stage for the development of modern AI.

Through her career, she’s also championed the cause of encouraging more gender and racial diversity in STEM. She co-founded the San Francisco-based nonprofit AI4ALL to expose high school students from various backgrounds across the US and Canada to AI studies.

Li is also an advocate for maintaining a code of ethics and removing problematic biases in the development of artificial intelligence, through her work and as a representative of the field of AI.

Her next project will see her run an academic center at Stanford University that will combine the study of AI and the humanities. Hopefully, that will see Li shape the future of how we approach the next phase of advancements in this field – with humans at the center.

Matthew Hughes‘ pick: If you’re not familiar with Janelle Shane by name, it’s likely you’ve come across her work, particularly if you’ve got an interest in artificial intelligence. In short, she’s the person who trains neural networks to do bonkers things, like tell jokes, or come up with utterly pointless degrees (let’s face it, a degree in “Psychology of Pictures in Archaeology” is nothing less than walking the long road to a cashier’s position in Burger King).

Tech can, at the same time, be both dry and threatening. Shane’s work, however, is fun and playful, and she shares her research in a manner that’s clear and accessible. It’s for precisely this reason why her blog is one of the few I get email notifications for.

Bryan Clark’s pick: Dr. Mae Jemison was the first African American to travel to space. Born in 1956, she was a studious child who spent a great deal of time with her nose nestled deep inside books about astronomy, chemistry, and engineering. Dr. Jemison went on to study chemical engineering at Stanford before attending medical school at Cornell.

As a physician, she worked in Kenya, Cuba, and a Cambodian refugee camp in Thailand before pursuing her dream, in 1985, of joining NASA.

In 1992, she became the first African American in space as one of six astronauts to crew the Endeavour in 1992. </p>

Dr. Jemison now leads 100 Year Starship, a DARPA-backed initiative that seeks to improve life on Earth while developing comprehensive plans to visit another star within the next 100 years.

Ailsa Sherrington’s pick: A large problem with blockchain is scalability – transactions tend to be quite slow, making it hard for a lot of people to use a blockchain at the same time. Without solving this problem, cryptocurrency will struggle to achieve global adoption.

Enter Elizabeth Stark, co-founder and CEO of Lightning Labs. Her company aims to scale blockchains, making them much faster and able to handle loads of transactions at the same time.

While there are certainly problems with it, she’s made it possible for the industry to move in the right direction to try and achieve scalability. This makes her kind of a badass.

On top of that, she’s taught at Stanford and Yale, advises several other companies, and was a huge player in defeating the SOPA/PIPA bills.

Who’s your favorite influential woman in STEM? Let’s know in the comments who we should look out for in 2019.

Read next: End of year crypto roundup: How did Ripple perform in 2018?