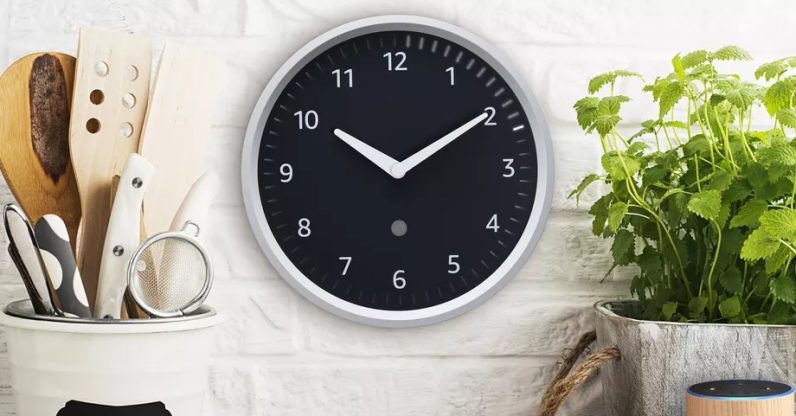 Amazon announced a plethora of new products today, including about four hundred devices which will have Alexa in them. Highlights include the Echo Auto, the Alexa Guard, and an AmazonBasics Microwave that includes an Alexa Connect Kit. All fine and dandy, I’m sure — but the product that most intrigues me is probably also the most innocuous: An Alexa-integrated Echo Wall Clock.

Most of the stuff Amazon revealed at the show was already leaked or revealed through rumors. We already had an inkling about the Alexa-enabled microwave, as rumors about it surfaced earlier this week, and images of various Echo devices leaked yesterday. But the clock? Not something I’d heard of or even knew I wanted until I saw it.

When you see the Echo Clock, it looks like an old-school analog clock, of the sort most of us keep around out of a sense of aesthetics and nostalgia rather than actual utility (don’t lie, you know you’ll look at your phone twelve times for every single time you look at your wall clock). And it has none of what one might consider Alexa’s usual bells and whistles — no microphones, for example.

Instead, the device pairs to your other Alexa hubs via Bluetooth. When you holler at your smart speaker to set a timer, for example, a set of LED lights will appear around the side of the clock, showing how much time is left in the countdown. You can apparently set multiple timers at once, and the clock will also chime when it reaches the end of a countdown or hits an alarm.

Also, and this is probably the most pleasant feature about it, it’ll keep accurate time, meaning it’ll automatically adjust for Daylight Savings. No more pulling the clock off the wall and taking a cloud of dust to the face, winding the clock as clumsily as possible, and struggling to hang it back on a nail you can’t see.

Turning the wall clock into smart device is actually pretty smart — those of us who have them keep them at or above eye-level, meaning it’s easier for our eyes to find them in a hurry. They’re more pleasant to look at than digital readouts, and they just look classic. And while some may complain about Amazon stuffing Alexa into every conceivable crevice within the typical home, I’m sold on the idea that one can work with such a common household object, instead of phasing it out entirely.

No, it’s not the device that’s going to light the world on fire, but it’s cool to see such a staple of old-school decorating being given an Alexa-style facelift. And it’s only $30, though admittedly that comes with the caveat that you need another Alexa device with which it can interact. Now if it comes in different colors or styles to match my rather erratic decorating, I’ll take five of them.

Read next: Here are the upcoming Alexa features we're most excited about