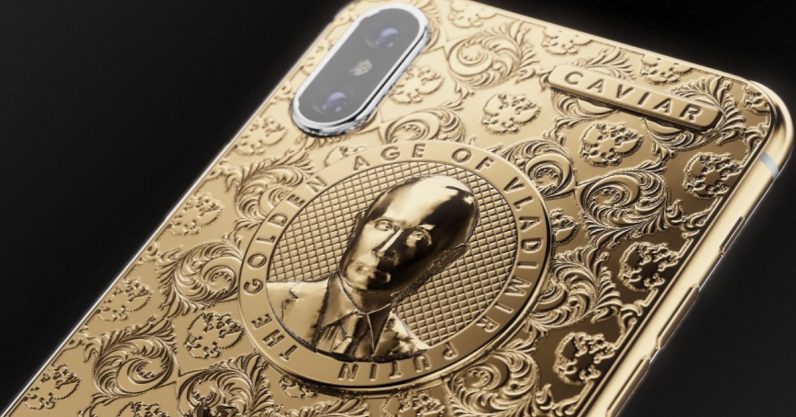 Do you have a lavish pile of money sitting around that you just hate and want to get rid of in a hurry? Are you fond of the droopy mug of Russian president Vladimir Putin? Are you an Apple fan? Congratulations, all 76 of you who answered in the affirmative to all three questions — luxury smartphone maker Caviar is making a phone for you.

For the rest of us: The company that brought you the $3,200 iPhone 6s with Putin’s face engraved in gold is back again, and it’s somehow managed to make a custom Apple product even more garish and ludicrous than before.

Caviar, the company that made the aforementioned 6s, has apparently decided its previous effort was just a little too staid, with its sober titanium color enhanced with a golden profile. And by its own standards that may be true — Caviar has also made such offerings as the Tesla phone with a solar panel built into the back, and an iPhone X covered in stone from a meteorite. So, to celebrate Putin’s win in Sunday’s presidential election, it’s pulled out all the stops.

The rebuilt back of the iPhone X is inlaid with pure 24k gold. On it is carved a head-on portrait of Putin, a side view of the Kremlin, and the Russian coat of arms — the last one particularly redundant, since the entire back of the phone is patterned with smaller, less detailed versions of the coat of arms.

At the bottom are carved the words, in Russian, “We are committed to the best future. And we will achieve it.”

According to Caviar’s website (via Google Translate; sorry, my knowledge of Cyrillic is a little rusty), it is making 76 copies of the Golden Age, to match the percentage of Russians who voted for Putin. That makes it slightly more common than the Putin 6s, of which there were only 63 copies made.

Shipping is free, because Caviar apparently knows when to offer small mercies.

Read next: Instagram now lets you link to hashtags and other profiles in your bio