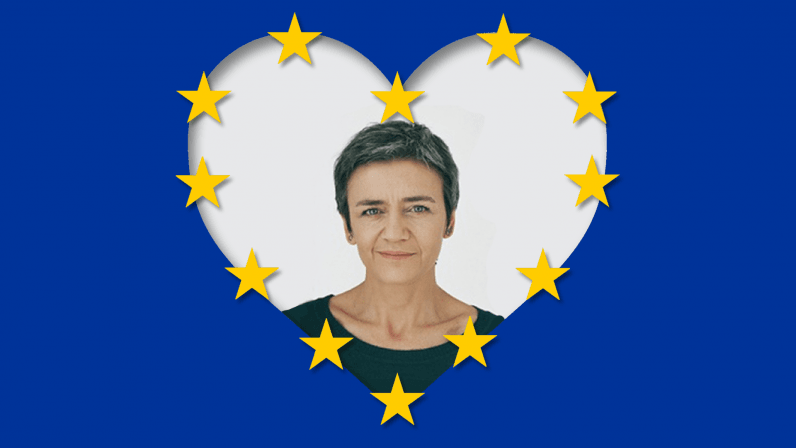 I know most people would have chosen somebody like Elon Musk, Mark Zuckerberg, or the incredibly talented will.i.am as the tech person of the year, but I went another way, a person that in the strictest sense isn’t even in tech. For me, the person that influenced tech in the most positive way in 2017 was the EU’s Commissioner for Competition: Margrethe Vestager.

She has had a massive impact on how big tech operates in Europe — and quite possibly the rest of the world — through monumental cases such as Amazon’s €250 million tax fine and Alphabet’s (Google) historic €2.4 billion fine for anti-trust violations. I could write an article just listing her regulatory accomplishments but let’s face it, nobody would read that. That’s why I’ll be focusing on the ideals she’s bringing to tech through her role as Commissioner and why they’re important.

Some might view Vestager as a regulatory downer who smothers innovation, but for me she’s the hero we need to make tech development sustainable for the future.

Ever since taking office in 2014, it’s been clear that Vestager meant to take big tech head on. She brought a certain zeal to the office and she’s generally perceived to be more determined than her predecessor, especially when it comes to putting influential companies in their place.

Up until now, Vestager has been mostly concerned with tax practices of big tech — like the massive €13 billion tax bill she made Ireland collect from Apple back in 2016 — but it’s been reported that she’s now made her team look into cases concerning how companies collect and use personal data. That doesn’t come as a surprise, given Vestager’s digital privacy concerns.

Her view, and her mission, was crystalized in her speech at the Web Summit in Portugal back in November. She said that tech companies need to ensure that “society [is] served by technology and not the other way around.” I can’t see how anybody could argue against this sentiment — which could be the key to good technology — but I’ve yet to see any other influential people in tech work as hard towards that goal as Vestager has.

You might think it’s fine that she’s fighting for the little guy (us), but she’s kind of killing tech while doing it, right? Well, no, I can’t disagree more. I’d like to argue that Vestager’s (and the EU’s) fight to keep big tech in check is beneficial to everybody.

Why Vestager is good for tech

Nothing kills innovation like unfair competition. If you have no chance competing with already established tech companies, why would you spend time and money working on innovation? The simple answer is, you wouldn’t.

And the truth is, that would probably happen if companies like Google weren’t kept on a regulatory leash, which you can’t really blame them for. I mean, what business wouldn’t want to cement its market share? But we need to make sure that doesn’t happen so we don’t end up with a dystopian web, where we, the people, would lose our freedom.

Tech is advancing at frightening speed, at least for the average person. That’s completely understandable seeing that we’re on the cusp of an AI driven world. Futurist Ben Hammersley argued at our conference in 2017 that the normal people’s fear of technology was probably one of the underlying factors for the rise of Trump and the blunderous Brexit.

When people are scared they react in unpredictable and often destructive ways, which is bad because tech is only getting scarier. That’s why it’s so incredibly important that new technologies are built on trust, and people like Vestager are the ones the ensure that they are. She’s trying to make sure that everybody, no matter how big or important they might be, play according to the rules that we as a society have set.

It isn’t sustainable to allow companies to advance tech completely unhinged because one can imagine that the reaction from the general public might only get more severe in the future. We need to make sure that tech is built to serve people and that companies have our interests, not just their own, in mind — for our sake and the sake of technological advancement. We don’t get to vote on what Amazon, Google, Apple, or others will do, but we do get to vote for the people that create the rules those companies must adhere to.

Now you might think it’s ridiculous to be so dramatic about the future of tech, that it’s only a tool or a device that can be used to our benefit or our detriment, it just depends on the person wielding it. That’s technically true, but I’d say we aren’t quite there yet, especially with frontier tech like AI.

I’ve heard a few tech evangelists use a variation of the same analogy when promoting somewhat controversial technologies. It’s that tech is only a tool, like a hammer, and that it can be used constructively — like building a house — or destructively — like breaking someone’s fingers.

However, that analogy doesn’t work for tech unless we have strict regulations in place that make it illegal to misuse the tool. If you attack someone with a hammer, you go to jail, but right now, we haven’t similarly prescribed repercussions when companies use digital tools in a way that harms us, the consumers. However, people like Vestager are the ones that are trying to fix that, and working hard to do so.

The importance of symbolism

Of course Vestager isn’t pulling regulatory miracles out of her sleeve through some personal magic. She has the power of organizations and governing bodies governing bodies behind her, and in many ways, she’s just the one to implement the rules that have been already set. We all know that, but I can’t help but feel that what she brings to the office, through her character, is almost equally important.

We humans are simple creatures and we need help with understanding large and complex issues, and one of the easiest ways to do that is through people, by having a real person at the helm that acts as a representation of the issue. We could probably achieve just the same through committees, institutions, and organizations — but it just wouldn’t make its mark on the general consciousness like having a person embody those values. The added symbolism of having a woman at the forefront of reigning in a male-dominated field also doesn’t hurt in today’s climate.

Vestager isn’t necessarily a perfect human or a politician with impeccable ideals, but at least she’s trying (and succeeding) to keep tech responsible through accountability — and that’s exactly what we need. I can’t wait to see what she’ll do for tech in 2018 and if you’re the same, you can follow her on Twitter, where she frequently shares updates on her work.

Read next: This amusing iPhone X game turns your face into a controller