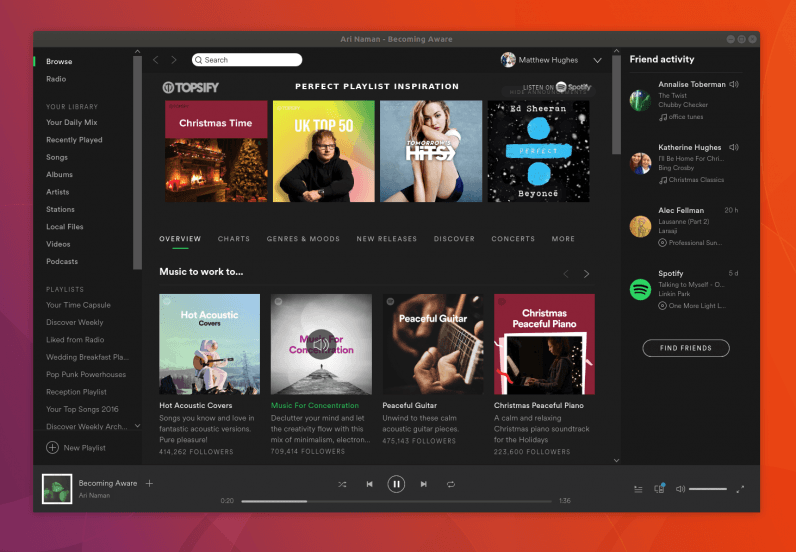 Linux-loving users of Spotify have had it rough for the past few years. Spotify stopped active development on its desktop client back in 2016. This left users with an unenviable choice between a visibly outdated desktop client, or using the web app.

Thankfully, right before Christmas, Spotify is coming back to Linux. The company is distributing the application as a snap, and it runs perfectly on Linux Mint, Manjaro, Debian, Open Suse, Solus, as well as Ubuntu.

Snaps are little different from what you get with your package manager. They’re containerized packages that work consistently across all machines, meaning developers don’t have to release different builds for different distributions. There’s just one build to rule them all.

In a statement, Jamie Bennett, VP of Engineering, Devices & IoT at Canonical, said:

“In launching their own Snap, Spotify has ensured that their users in the Linux ecosystem are now able to enjoy the latest version of their leading music streaming application as soon as it’s released regardless of which distribution they are using”

I downloaded Spotify’s new Linux snap earlier, and was pretty impressed. Sound quality is good, the UI is responsive, and it has all the features offered by the mainline version of Spotify. Playlists, videos, podcasts, friend activity — it’s all there.

I was also able to control playback through the function buttons at the top of my keyboard, which is something that doesn’t happen on the web version without installing a third-party plugin.

In short: it’s Spotify as you know it. As someone who uses Linux as my daily driver, I’m really excited about this. It’s nice that Linux users are no longer treated as second-rate customers. And yes, I’m looking forward to never having to pick out the Spotify web tab out of hundreds of others, just to skip a track I don’t like.

If you’re as excited as I am, you can download Spotify for Linux here.

Read next: Google's AI can predict whether humans will like an image or not