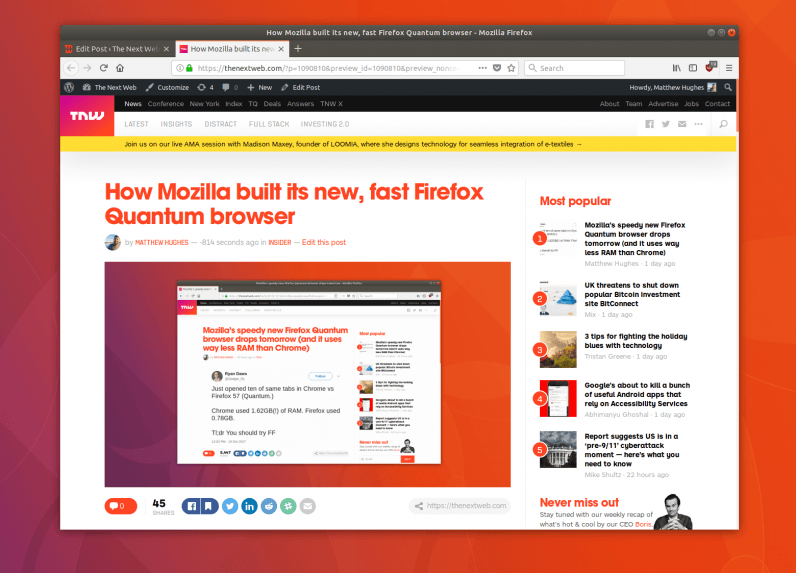 Mozilla’s long-awaited Firefox Quantum browser launched today. But if you’re still sat on the fence about whether you want to upgrade, perhaps this will persuade you. TNW spoke to Nick Nguyen, Vice President of Product at Firefox, about what punters can expect from Quantum, and how it actually works under the hood.

Mozilla says Firefox Quantum is twice as fast as the versions of Firefox released in 2016. Moreover, it’s less taxing on your computer’s memory, and purportedly uses 30 percent less than the latest version of Google Chrome. So, how has Mozilla managed to accomplish this?

“This story starts a couple of years ago. Probably the most unique aspect of Firefox Quantum, our secret sauce, is its use of Rust, the programming language that we developed, to run parts of the browser in parallel (e.g CSS engine), utilizing multiple CPU cores,” Ngyuen told me.

But where Quantum really distinguishes itself is its use of Rust:

“Browsers have traditionally been written in C++. When programming in C++, it’s rather easy for programmers to inadvertently introduce bugs or security vulnerabilities when they try creating complex algorithms that run in parallel. Rust has allowed us to code new algorithms that make the web experience in Firefox Quantum super fast and safe.”

“We’re also using a few extra tricks, like prioritizing the foreground tabs rather than the tabs you’re not looking at, or first loading the content you care about e.g. the article you’re reading rather than the contextual design elements (website logo or ads),” he added.

To emphasize this massive performance leap, Mozilla has released a video showing a side-by-side comparison between Chrome and Firefox Quantum, as it opens ten popular sites.

As highlighted by Nguyen, a huge part of the “secret sauce” that makes Firefox Quantum perform so well is its brand-spanking new CSS engine. I asked him to explain how this works.

“Because battery life is so important, most modern computers utilize multiple processing cores to execute programs. Writing software for multiple processors is difficult for many reasons, not the least of which being that the most popular programming languages today were not created with multi-core processing in mind, requiring developers to do a lot of mental bookkeeping to prevent errors. With Rust, we had a hand in creating a programming language where many of the common errors associated with programming for these systems are simply impossible.

Computing styles for CSS is a difficult task and up until now, one that was hard to split onto multiple cores because of the complexity of the work. To take advantage of the most common modern hardware, we wrote the new multi core CSS engine, Stylo, in Rust, speeding up our development time and minimizing the chance of errors.”

The most exciting part of this is the new CSS engine, which gets faster the more cores you add into the mix.

“Fun fact: Stylo scales almost perfectly with the number of cores you have, so if you have four cores, Stylo is almost four times faster than it would be on a single core of similar performance. This benefit is rare in most software,” Nguyen said.

As is the case with previous Firefox browsers, Mozilla is confident that Quantum will perform well on most austere machines. “At Mozilla, we’re the browser maker. That’s what we do. We’re here to make the web accessible to all, and that means to people that use older machines too,” explained Nguyen.

“One of the great things about Firefox Quantum is our architecture allows us to adjust our footprint based on the available system resources of the computer. If you have a 32 bit machine with less than 4 gigabytes of RAM, we’ll run great, just as we do on a high end gaming PC. 30% less memory used by the browser means you can do a lot more stuff on your computer at the same time, outside of your browser, or in your browser, like having way more tabs opened. And these tabs can run videos, gdocs or press articles, without slowing down your machine.”

While the biggest reason to get excited with Firefox Quantum is found lurking under the hood, it also comes with some pretty nifty visual tweaks, courtesy of the new Photon UI.

According to Nguyen’s, “Photon reflects in the UI what we did in the engine: it feels fast and super responsive. It’s what people will notice, and it wouldn’t be possible without the Quantum enhancements.”

So, how does this translate into an actual user experience?

“In terms of user experience, what matters is that if something feels slow, it is slow. We spent a lot of time working on this perception of speed and quality, and as a result, we have smooth animations throughout with crisp iconography that matches the quality of the display of your computer.

Also, we built Photon with the idea that WebExtensions will continue to flourish and give users the ability to customize Firefox to their heart’s desire. We created space in the UI for future expansion that both the Firefox team and add-on developers to use.”

Part of Firefox (and Vivaldi. And Opera’s) strategy for growth is including value-added extras that don’t add anything to the core browsing experience, but rather compliment it expertly. Nguyen couldn’t help but mention one of them, Screenshots,

“We released Screenshots in the last Firefox release, and we used our Photon thinking in creating the feature  by balancing the UI paradigms that people are familiar with new and novel features that win by saving time for the people that use our product, users find the feature intuitive yet empowering,” he said.

“Experts have been posting screenshots through a variety of advanced tools. In our research, we saw lots of people use tools like smartphone cameras and email to save pictures of the desktop web, and I’m happy to say that solving this problem has resulted in almost 16M screenshots saved since we launched the feature with Firefox 56.”

“Photon reflects our relentless focus on what is good for users, whether they are experts in technology or simply want to get things done with a minimum of effort and stress,” he said.

Besides all these points, one of the best reasons to give Firefox Quantum a try is that Mozilla is actually concerned about the privacy of those that use its software, with Nguyen saying “What also sets the new Firefox browser apart is that it’s backed by Mozilla, a not-for-profit, with a mission to keep the internet open and accessible to all. It is not run by the world’s largest advertising company.”

Firefox Quantum is available from today, and can be downloaded here.

UPDATE: A previous version of the post stated that the CSS engine gets “exponentially faster” with more cores – which would have been great. Unfortunately, but still pretty cool, the speed scales up linearly.