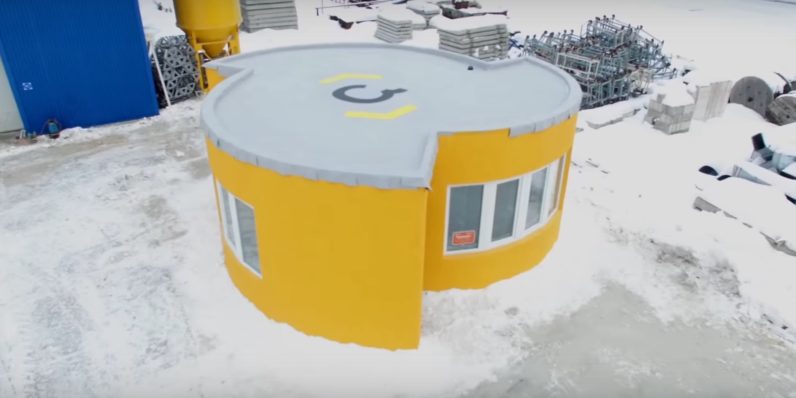 A 3D-printing company managed to build a star-shaped house on-site in just one day.

The cheery yellow dwelling is tiny — just 400 square feet — and circular in layout. The company — San Francisco-based Apis Cor —  built the house from a concrete mixture which it says lasts around 175 years.

Apis Cor built the house at its test facility in Moscow, where the temperature proved to be the biggest roadblock. Concrete won’t set below a certain temperature, so the team erected a tent around the printer to keep out some of the freezing air.

Shaped like a crane, the printer is relatively easy to transport. Once on site, it builds from a central point, erecting a house from the ground up. Most 3D printers have to build off-site, and transport the pieces for assembly.

Apis Cor’s site and video documentation don’t say if the entire house was done in 24 hours, or just the foundation and concrete frame. No matter what, it’s an impressive accomplishment.

Interestingly, Professor Behrokh Khoshnevis predicted this during a TEDx talk in 2012, when he posited the idea that houses in the future could be 3D-printed in as little as 20 hours.

Read next: BeeHex robot can 3D-print (and cook) a pizza in just 6 minutes