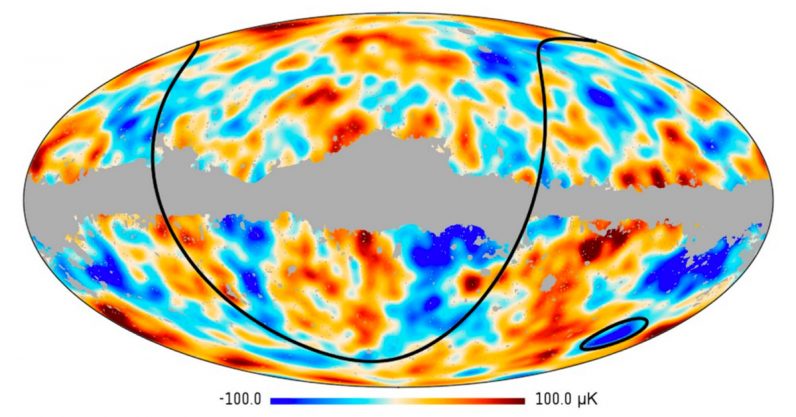 The cosmic web — ribbons of gas and dust tying galaxies together — are the largest structures in the Universe, and a new study shows they are growing hotter over time.

Utilizing a phenomenon known as the Sunyaev-Zeldovich effect, astronomers find these ribbons are three times hotter than they were eight billion years ago.

“Combining the latest data with a state-of-the-art theoretical model, we were able to reveal how the temperature of the Universe evolved, and how it was linked to the formation of the large-scale structure of the Universe,” Ryu Makiya, a research fellow at the Kavli Institute for the Physics and Mathematics of the Universe (Kavli IPMU), explains.

“As the Universe evolves, gravity pulls dark matter and gas in space together into galaxies and clusters of galaxies. The drag is violent — so violent that more and more gas is shocked and heated up,” said Yi-Kuan Chiang, research fellow at the Ohio State University Center for Cosmology and AstroParticle Physics.

By measuring the temperatures of these intergalactic ribbons, it is possible to determine the temperature of the Universe during different eras. This is accomplished through a process known as the Sunyaev-Zeldovich effect.

The “echo” of the Big Bang can be seen today as the cosmic microwave background radiation. Billions of years ago, as this electromagnetic radiation encountered hot electrons in the ribbons it gathered energy, and the gas became visible. The degree to which this effect occurs is dependent on the thermal pressure, which in turn is determined by the temperature of the electrons.

By determining the degree of the Sunyaev-Zeldovich effect, it is possible to determine the thermal pressure within the gas, from which astrophysicists determine the temperature of the electrons.

Details of the cosmic microwave background were provided by the ESA’s Planck satellite. Observations of galaxies came from the Sloan Digital Sky Survey (SDSS). By combining data from both sky surveys, astronomers were able to piece together details of this intergalactic heating.

“To do so, we cross-correlate eight sky intensity maps in the Planck and Infrared Astronomical Satellite missions with two million spectroscopic redshift references in the Sloan Digital Sky Surveys,” researchers detail in The Astrophysical Journal.

The team found the mean electron temperature within these ribbons rose from 700,000 Kelvin eight billion years ago to roughly two million Kelvin today.

This heating was also found to be the result of gas flowing into the ribbons, as it is shock heated in the collapsing structures.

“For 20 years, we have been studying how to measure this using the Sunyaev-Zeldovich effect. We now have finally measured the temperature of the Universe, not only thanks to the remarkable progress in observational data, but also due to the dedicated efforts of brilliant young scientists such as Yi-Kuan Chiang and Ryu Makiya. This is very satisfying,” Eiichiro Komatsu, director at the Max Planck Institute for Astrophysics, stated.

As time goes on, the ribbons of the cosmic web are starting to be the hot place to hang out!