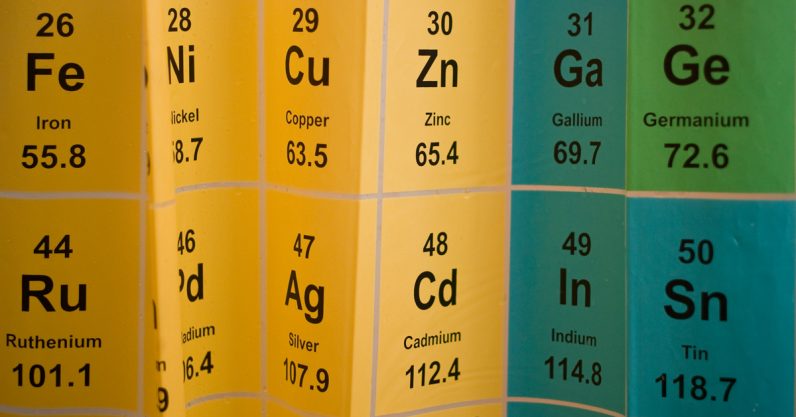 The periodic table of the elements, principally created by the Russian chemist, Dmitry Mendeleev (1834-1907), celebrated its 150th anniversary last year. It would be hard to overstate its importance as an organizing principle in chemistry – all budding chemists become familiar with it from the earliest stages of their education.

Given the table’s importance, one might be forgiven for thinking that the ordering of the elements was no longer subject to debate. However, two scientists in Moscow, Russia, have recently published a proposal for a new order.

Let’s first consider how the periodic table was developed. By the late 18th century, chemists were clear about the difference between an element and a compound: elements were chemically indivisible (examples are hydrogen, oxygen) whereas compounds consisted of two or more elements in combination, having properties quite distinct from their component elements. By the early 19th century, there was good circumstantial evidence for the existence of atoms. And by the 1860s, it was possible to list the known elements in order of their relative atomic mass – for example, hydrogen was 1 and oxygen 16.

Simple lists, of course, are one-dimensional in nature. But chemists were aware that certain elements had rather similar chemical properties: for example lithium, sodium and potassium or chlorine, bromine, and iodine. Something seemed to repeat and by placing chemically similar elements next to each other, a two-dimensional table could be constructed. The periodic table was born.

Importantly, Mendeleev’s periodic table had been derived empirically based on the observed chemical similarities of certain elements. It would not be until the early 20th century after the structure of the atom had been established and following the development of quantum theory, that a theoretical understanding of its structure would emerge.

Elements were now ordered by atomic number (the number of positively charged particles called protons in the atomic nucleus), rather than by atomic mass, but still also by chemical similarities. But the latter now followed from the arrangement of electrons repeating in so-called “shells” at regular intervals. By the 1940s, most textbooks featured a periodic table similar to the ones we see today, as shown in the figure below.

It would be understandable to think that this would be the end of the matter. Not so, however. A simple search of the internet will reveal all sorts of versions of the periodic table. There are short versions, long versions, circular versions, spiral versions, and even three-dimensional versions. Many of these, to be sure, are simply different ways of conveying the same information but there continue to be disagreements about where some elements should be placed.

The precise placement of certain elements depends on which particular properties we wish to highlight. Thus, a periodic table that gives primacy to the electronic structure of atoms will differ from tables for which the principal criteria are certain chemical or physical properties.

These versions don’t differ by much, but there are certain elements – hydrogen for example – which one might place quite differently according to the particular property one wishes to highlight. Some tables place hydrogen in group 1 whereas in others it sits at the top of group 17; some tables even have it in a group on their own.

Rather more radically, however, we can also consider ordering the elements in a very different way, one which does not involve atomic number or reflect electronic structure – reverting to a one-dimensional list.

The latest attempt to order elements in this manner was recently published in the Journal of Physical Chemistry by scientists Zahed Allahyari and Artem Oganov. Their approach, building on the earlier work of others, is to assign to each element what’s called a Mendeleev Number (MN). There are several ways to derive such numbers, but the latest study uses a combination of two fundamental quantities that can be measured directly: an element’s atomic radius and a property called electronegativity which describes how strongly an atom attracts electrons to itself.

If one orders the elements by their MN, nearest neighbors have, unsurprisingly, rather similar MNs. But of more use is to take this one step further and construct a two-dimensional grid based on the MN of the constituent elements in so-called “binary compounds.” These are compounds composed of two elements, such as sodium chloride, NaCl.

What is the benefit of this approach? Importantly, it can help to predict the properties of binary compounds that haven’t been made yet. This is useful in the search for new materials that are likely to be needed for both future and existing technologies. In time, no doubt, this will be extended to compounds with more than two elemental components.

A good example of the importance of the search for new materials can be appreciated by considering the periodic table shown in the figure below. This table illustrates not only the relative abundance of the elements (the larger the box for each element, the more of it there is) but also highlights potential supply issues relevant to technologies that have become ubiquitous and essential in our daily lives.

Take mobile phones, for instance. All of the elements used in their manufacture are identified with the phone icon and you can see that several required elements are becoming scarce – their future supply is uncertain. If we are to develop replacement materials that avoid the use of certain elements, the insights gained from ordering elements by their MN may prove valuable in that search.

After 150 years, we can see that periodic tables are not just a vital educational tool, they remain useful for researchers in their quest for essential new materials. But we should not think of new versions as replacements for earlier depictions. Having many tables and lists only serves to deepen our understanding of how elements behave.

This article is republished from The Conversation by Nick Norman, Professor of Chemistry, University of Bristol under a Creative Commons license. Read the original article.

Read next: These extended Black Friday deals of work from home essentials can get 2021 off on the right foot