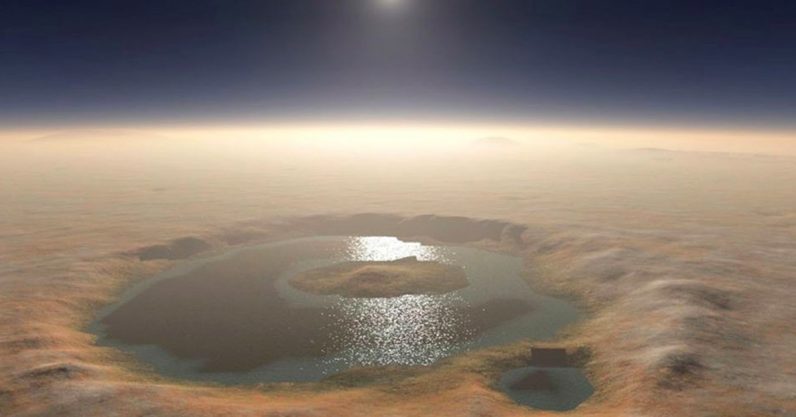 Long ago, when our solar system was young, Mars was a world teeming with water. Researchers at Cornell University have now found evidence of an ancient massive megaflood on the Red Planet.

Gale Crater, explored by the Curiosity rover, provided data showing distinct signs of a titanic flood, roughly four billion years in the past. This finding could provide further evidence that Mars once had a climate suitable for the development of primitive life.

“We identified megafloods for the first time using detailed sedimentological data observed by the rover Curiosity. Deposits left behind by megafloods had not been previously identified with orbiter data,” Alberto Fairén, a visiting astrobiologist in the College of Arts and Sciences at Cornell University, stated.

Ancient geological features seen on Mars by the Curiosity rover show megaripples, or antidunes, almost 10 meters (30 feet) high in sedimentary layers. These waves are placed roughly 140 meters (450 feet) apart from each other.

Ezat Heydari, a professor of physics at Jackson State University, points out that similar features, created just two million years ago, are known on Earth. On our own planet, these features are created by melting ice.

“Features indicative of floods are a series of symmetrical, 10 m-high gravel ridges that occur in the Hummocky Plains Unit (HPU). Their regular spacing, internal sedimentary structures, and bedload transport of fragments as large as 20 cm suggest that these ridges are antidunes: a type of sedimentary structure that forms under very strong flows,” Heydari and his team report in an article detailing their study published in Scientific Reports.

The Noachian Period on Mars, lasting from roughly 4.1 billion years ago (BYO) to 3.7 BYO, roughly corresponds to the Late Heavy Bombardment era of our solar system. This period was marked by massive, frequent collisions between planets and objects, large and small, coursing through the Solar System. This era also marks the time when Mars was, literally, awash with water.

Researchers speculate these megaripples are the result of heat generated by a massive impact on Mars in the distant past. Such an impact would have released vast quantities of carbon dioxide, water vapor, and methane from beneath the surface of Mars, warming the Red Planet for a short time.

Water vapor rising into the Martian atmosphere would have formed water clouds, much like those on Earth. These conditions, in turn, led to torrential rains which may have engulfed the Red Planet.

Gale Crater would have been flooded by water pouring into the basin, including a torrent racing down the steep incline of Mount Sharp.

Water from the south of the crater, racing north, was at least 24 meters (nearly 80 feet) deep, moving at 10 meters per second (20–25 MPH), the study concluded.

Massive flash floods would have deposited the gravel ridges seen by Curiosity in the Hummocky Plains Unit and the Striated Unit. These ridge-and-trough band formations, resembling waves in the ground, dominate large regions of Arizona.

My name is Henry Gale! I’m from Minnesota!

Sitting near the Martian equator, Gale Crater was formed more than 3.5 billion years ago in a titanic explosion, when Mars was struck by a massive asteroid. Named for Australian astronomer Walter F. Gale, this Martian crater stretches 154 km (96 miles) from one side to another.

On August 5, 2012, the Mars Science Laboratory (commonly known as the Curiosity rover) touched down at the foot of a layered mountain on the floor of Gale Crater.

This robotic explorer found that Gale Crater was home to large bodies of water, which lasted for a significant period of time before Mars lost its surface water to space and hidden underground deposits of brine.

“There was an ocean above us, held in by a thin sac that might rupture and let down a flood at any second.”
― Stephen King, Different Seasons

Near the center of the crater sits Mt. Sharp, a crescent-shaped formation of sedimentary rocks 5 km (three miles) across. This peak, named in honor of geologist Robert Sharp, is taller than Mt. Rainier. Massive canyons of Mars seen on Mt. Sharp include the Grand Canyon of Gale Crater, two thousand meters (6,500 feet) wide and nearly 90 meters (300 feet) deep.

“Early Mars was an extremely active planet from a geological point of view. The planet had the conditions needed to support the presence of liquid water on the surface — and on Earth, where there’s water, there’s life. So early Mars was a habitable planet. Was it inhabited? That’s a question that the next rover Perseverance… will help to answer,” Fairén said.

Mysteries of this Martian megaflood will, hopefully, be answered when NASA’s Perseverance rover, launched on July 30, reaches Mars on February 18, 2021.