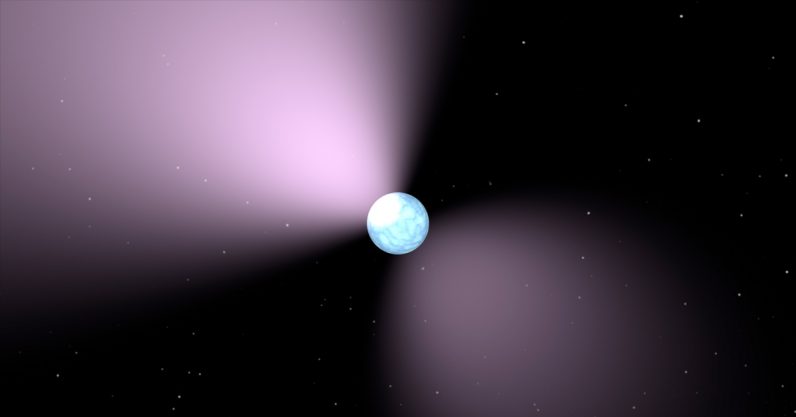 On May 22, 2020, light from a titanic explosion deep in space reached Earth. The energy seen by astronomers told of the collision of a pair of neutron stars, creating a kilonova explosion. This event, releasing more energy in a half-second than our Sun will produce in 10 billion years, left a rare object behind in the debris.

When astronomers examined the eruption, they found evidence of a magnetar — an ultradense neutron star, roughly the size of a city, housing a powerful magnetic field.

The discovery — the first time a collision of neutron stars has ever been seen — was made through studies conducted in visible wavelengths of light, as well as infrared, radio, and X-ray frequencies.

The first light from the event, 7.6 billion light-years from Earth, was seen in the form of a highly-energetic short-gamma ray burst. These are gamma-ray bursts that last less than two seconds (longer GRBs are thought to be the result of the collapse of the core of a supermassive star).

Typically, astronomers expect the collision of a pair of neutron stars to result in the near-instantaneous collapse of the dead stars into a black hole. However, this was not what astronomers found as they watched the aftermath of the GRB 200522A explosion.

“Our study shows that it’s possible that, for this particular short gamma-ray burst, the heavy object survived. Instead of collapsing into a black hole, it became a magnetar: A rapidly spinning neutron star that has large magnetic fields, dumping energy into its surrounding environment and creating the very bright glow that we see,” said Wen-fai Fong, an astrophysicist at Northwestern University.

In a champagne kilonova in the sky…

The collision of a pair of neutron stars is thought to have two main phases following the explosion. The aftermath, lasting a few days, is marked by collisions between material racing away from the site of the collision at fantastic speeds, and the envelope of gas surrounding the event. This is followed by the kilonova glow of moving particles swirling around the region of space surrounding the collision.

Kilonovae can be 1,000 times brighter than a typical supernova explosion. Only one such confirmed event has been seen before this latest display — in 2017.

However, the kilonova glow from GRB 200522A was found to be 10 times greater than anyone expected, particularly in infrared wavelengths, confounding researchers.

“These observations do not fit traditional explanations for short gamma-ray bursts. Given what we know about the radio and X-rays from this blast, it just doesn’t match up. The near-infrared emission that we’re finding with Hubble is way too bright,” said Fong.

Researchers realized it was possible that the rapid rotation of the neutron stars — spinning a thousand times a second — may have transferred into material ejected from the explosion. Such a process could have resulted in the release of vast amounts of electromagnetic radiation, the study suggests.

“The intense flashes of gamma rays from these bursts appear to come from jets of material that are moving extremely close to the speed of light. The jets do not contain a lot of mass — maybe a millionth of the mass of the Sun — but because they’re moving so fast, they release a tremendous amount of energy across all wavelengths of light,” NASA explains.

The radioactive decay of heavy elements from the kilonova explosion is believed to produce critical elements in the Cosmos, including gold and uranium.

The collision, which should have formed a black hole, instead (apparently) formed a magnetar, a supermassive, highly-energetic neutron star. Just around two dozen magnetars have been discovered so far.

“We only have one confirmed and well-sampled kilonova to date. So it is especially exciting to find a new potential kilonova that looks so different. This discovery gave us the opportunity to explore the diversity of kilonovae and their remnant objects,” said Jillian Rastinejad, a graduate student working with Fong.

The team also suggested two other possible processes that could have formed the magnificent burst seen from GRB 200522A. One possibility is that two waves of fast-moving particles crashed into each other, releasing energy mimicking the formation of a magnetar. Or, unknown methods of radioactive decay might be responsible for the display. However, the team believes astronomers are, in fact, seeing the creation of a magnetar.

If this event did form a magnetar, astronomers expect to see a release of radio waves from the region over the next few years. The James Webb Space Telescope, due for launch in 2021, is ideally suited to study events like GRB 200522A.